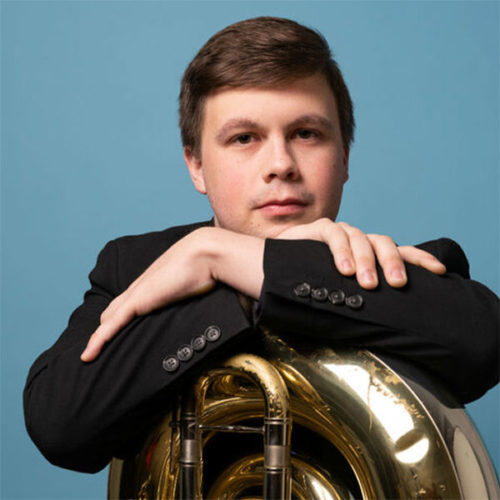 Dan Honaker is an Ohio-based low brass performer and educator. He currently serves as Adjunct Professor of tuba and euphonium at Wright State University, in Dayton, Ohio. In addition to his work as an educator Dan continues an active performing career. As an orchestral tuba player, he performs as a regular substitute/extra musician with The Cleveland Orchestra, San Francisco Symphony, Malaysian Philharmonic and Columbus (OH) Symphony among many others.

As a chamber musician Dan has recorded “6 Movements for Brass” by Elliott Miles McKinely on Navona Records with the New York Festival Brass Quintet. Additionally, he can be heard on recordings with the San Francisco Symphony, National Orchestral Institute Philharmonic and a number of video game soundtracks.

During the summers Dan has attended and performed with the Music Academy of the West, Spoleto Festival USA, the National Orchestral Institute and the Grafenegg Festival in Austria.

In 2019 Dan completed a 3 year fellowship as Principal Tuba with “The Orchestra Now” based at Bard College in NY. During his time at Bard Dan earned a Masters of Music in Curatorial, Critical and Performance Studies. Prior to his time in NY Dan earned a M.M. in tuba performance from the San Francisco Conservatory of Music where he studied with Jeff Anderson, and a B.M. in tuba performance from Baldwin Wallace Conservatory where he studied with Yasuhito Sugiyama.