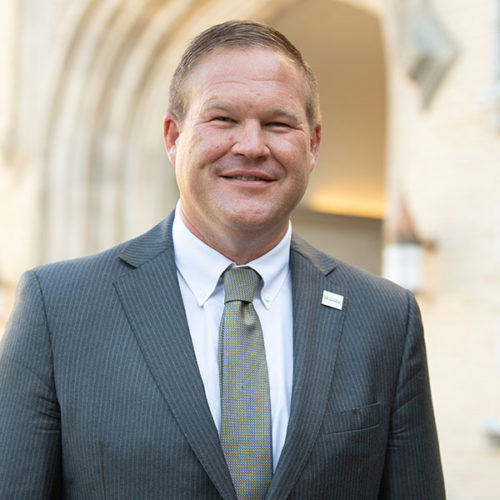 Interim President of The College of Wooster

Wayne Webster, Ed.D. assumed the role of interim president of The College of Wooster on July 1, 2022. He will serve in this capacity until the 13th president of the College is selected and assumes office on or around July 1, 2023.

Webster is a trusted leader with more than 20 years of executive leadership experience advancing the missions and fundraising priorities at nationally ranked small and large colleges and universities. Throughout his tenure, he has served as a member of the president’s cabinet, chief liaison to the board, led strategic planning and oversaw historic fundraising campaigns, delivered award-winning constituent engagement programs, and played a key role in overall marketing, communications, and town-gown efforts.

He previously served as Vice President for Advancement at The College of Wooster, where he led the public phase of the $190 million Wooster’s Promise campaign, which resulted in a state-of-the-art life sciences building and significant endowment growth to help support strategic initiatives. He is currently leading the successful two-year $36 million fundraising effort for the student center renovation, set to complete in January 2023. During his four years at Wooster, the endowment has grown from $299.6 million to an estimated $420 million and he has played a role in helping to bring the endowment draw down from 5.88 percent to 5 percent over that period.

Prior to Wooster, Webster served as Vice President at the University of Northern Colorado (UNC), where he led the launch of the public university’s first comprehensive campaign. Prior to UNC, he served as Vice President for Advancement at Ripon College, where he led the largest comprehensive campaign in college history, resulting in robust annual fund and significant endowment growth, along with one of the most recognizable D-III athletic facilities in Wisconsin. In this role, he oversaw development, constituent engagement, marketing and communications, the college bookstore, and career services.

Together, Webster and his teams have generated nearly $250 million in combined philanthropic support for campus priorities, including but not limited to: scholarships and student needs, faculty development and research, curricular and co-curricular innovation, DEI priorities, capital improvements, and annual budgetary support. Additionally, he has worked with various constituents to create compelling engagement strategies for alumni, families, and local communities to support key campus initiatives. Increases in engagement have led to significantly more volunteer assistance with career development, internship, and mentoring opportunities for students, as well as greater support for admissions efforts.

Critical to his teams’ philanthropic and engagement success has been Webster’s role in helping to formulate and lead inclusive strategic planning efforts, in close partnership with a broad spectrum of campus stakeholders and external constituencies. Over his tenure, he has found that establishing partnerships and dialogue with faculty, staff, and students is essential to the success of his work in advancing the institution and its programs through philanthropy and volunteerism, influenced by transparent and careful planning. At each institution, he has played a leadership role in the crafting and execution of strategic plans, campus master plans, and annual budgets. Associated innovations include new or renovated campus spaces, endowed funds for student and faculty support, and new or re-imagined academic and co-curricular initiatives.

Webster has also played a key role in working with governing boards to improve their structure, practices, and board composition to better serve the institution they oversee. He has also been an active member of the communities in which he has lived by volunteering for service organizations, churches, and nonprofits as well as work on regional economic development efforts through local Main Street and Chamber of Commerce boards.

In his role at Wooster, he has helped to identify needs and solicit gifts to support DEI efforts including a Black Student Equity Fund, funds to support international and undocumented student who are ineligible for federal aid, and to provide more equitable access to experiential learning resources and opportunities. He has led efforts to identify and implement objectives specific to advancement work that work to further DEI efforts within his division and campus wide through philanthropy, engagement, and within the divisional culture. He has also implemented successful hiring practices for diverse staff and has assisted boards of trustees and alumni boards in helping to identify and recruit candidates whose lived experiences would enrich conversations in the board room.

Webster earned his Ed.D. from The George Washington University in Washington, D.C. He holds a B.A. in public administration and political science as well as an M.A. in management from Doane University. He earned a certificate in Fundraising Management from The Center on Philanthropy at Indiana University.

Webster recently co-authored chapters that were published in Facilitating Higher Education Growth through Fundraising and Philanthropy (2016) and Disability and Equity in Higher Education Accessibility (2017). He has presented at multiple CASE regional conferences on topics ranging from campaign and strategic planning to the changing role of a campus vice president. While at Ripon College, he co-taught a class entitled Colloquium in Educational Policy: Politics and Economics of Higher Education in the United States.

The Board of Trustees, in collaboration with students, alumni, faculty, and staff members, are overseeing a search for the 13th President of The College of Wooster.

Please direct any questions regarding the search to presidentialsearch@wooster.edu.