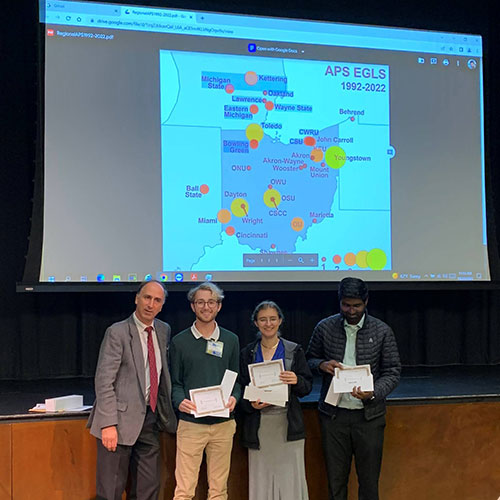 Two students who participated in The College of Wooster’s 2022 Research Experience for Undergraduates summer program earned awards for their research at a recent regional meeting of the American Physical Society (APS).

Four additional Wooster physics students also presented for the first time at a scientific conference, and two first-year, prospective physics majors joined the group to experience their first scientific conference. The conference is a group activity for current and prospective physics majors. In addition to the research presentations, students attended various plenary and contributed talks, the poster session, and the Friday evening banquet.

Johnson’s research was part of a project that has been continued at Wooster for more than 30 years that involves a conical pile of beads. A mechanism dropped beads of uniform size and mass onto the apex of the pile one at a time. Eventually, the pile avalanched off the side. A magnetic field around the beads allowed the cohesion in the pile to be controlled. Johnson’s research focused on understanding what happened in the time between the avalanches. The award-winning poster highlighted his results: as cohesion increased, the amount of time between avalanches and the size of the avalanches increased.

“I was very surprised to win. There were a ton of people with outstanding presentations. When they called my name, I was so excited to the point that I could not hear anything besides my heartbeat. I tried to treat my presentation like a conversation while trying to match my pace with how well it seemed like the other person was catching on,” said Johnson, who is a sophomore research assistant, peer mentor, and physics homework tutor. 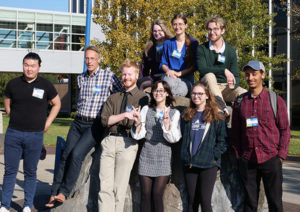 Manz, who is active with the regional APS section and the 2022-23 chair, has accompanied students to the spring and fall regional meetings for the last seven years, since he’s been at the College. “For most students, this is the first scientific meeting they attend. Besides just experiencing a physics conference, it might also be the first presentation of their own research results to other students and scientists. I especially think that giving an oral presentation at this conference is a less-intimidating environment than perhaps giving your first talk at a large national meeting,” he said.

This was the first time Johnson had attended and presented his research at a physics meeting. Being able to talk with other students and professors about their research confirmed his decision to study physics. “It really helped remind me how passionate I feel about physics,” Johnson said.

He encourages other students to consider presenting research at a conference such as APS. “It is an amazing opportunity that can teach you so many valuable skills. They can give you an idea of different areas of research and help you find a subject you may be interested in,” he said. “You also are introduced to people working in the areas of study that may lead to connections that can really help you in the future.”

The fall meeting was hosted by Lawrence Technological University in Southfield, Michigan.