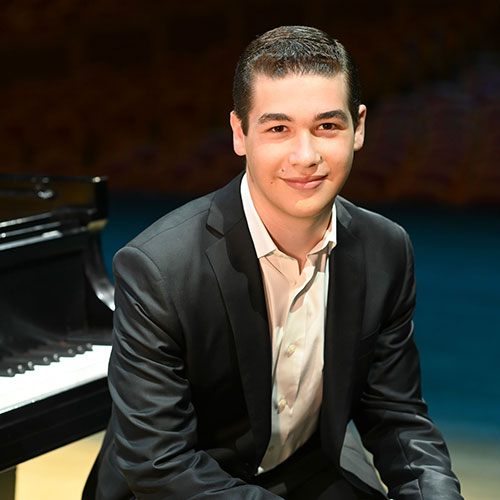 Wooster Symphony Orchestra, under the direction of Jeffrey Lindberg, will present a musical tribute to A Charlie Brown Christmas on Friday, Dec. 2 at 7:30 p.m. in the McGaw Chapel (340 E. University Street) at The College of Wooster. The WSO, along with guest artist and piano prodigy Brandon Goldberg and his trio, will perform Vince Guaraldi’s famous soundtrack to the 1965 animated television special. The performance also features College of Wooster senior Linat Westreich ’23, who will sing Barbra Streisand’s version of “My Favorite Things.”

Goldberg, now 17 years old, began to play piano by ear when he was three years of age. He started with classical lessons at age five, but quickly found his passion for jazz and learned about the music and its history. Goldberg released his debut album, Let’s Play!, in 2019 to rave reviews, garnering four stars from Downbeat magazine and reaching No. 7 on the Jazz Week charts. Goldberg’s second album, In Good Time, was released in September 2021 and showcases five original compositions and five standards, garnering rave reviews from London Jazz News and four stars from All About Jazz and Jazzwise.  In Good Time has also been recognized by Downbeat magazine as one of the top albums of 2021.

Additionally, Goldberg performed at the 2019 Newport Jazz Festival. He has also played at the Litchfield Jazz Festival, Dizzy’s Club, Bravo Niagara Festival of the Arts, The Apollo Theater, the Blue Note in New York, WDNA Radio, WDNA Miami Downtown Jazz Festival, and the FAENA Summer Jazz Series. Goldberg also has been a featured performer with the Miami Symphony Orchestra and the Jazz Roots series and has appeared on the Harry Connick, Jr. Show, NBC’s Little Big Shots, and the Steve Harvey Show.

In addition to directing the Wooster Symphony Orchestra, Lindberg teaches courses in jazz history and improvisation and directs the Wooster Jazz Ensemble. Lindberg is a co-founder and creative director of the Chicago Jazz Orchestra, Chicago’s oldest professional jazz orchestra in continuous operation.

This event is open to the public. Tickets can be purchased at Buehler’s Milltown and Towne Market or at the Ohio Light Opera office (353 E. Pine Street). Tickets are $20 for adults and $10 for students. For staff and faculty of The College of Wooster, tickets are $10, and students at the College with I.D. are admitted free of charge. For more information, contact Melissa Puster in the Department of Music at mpuster@wooster.edu or 330-263-2419.