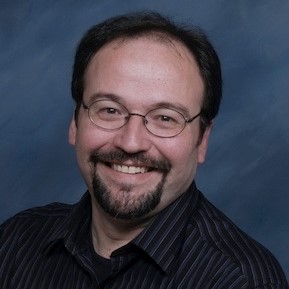 Peter Mowrey is a composer, arranger, pianist, writer, and Professor of Music at the College of Wooster in Ohio.

As a composer, Mowrey writes primarily chamber and electronic music, often inspired by mythological themes. Among his recent works are the electronic opera Sangreal, featuring seven characters from different times and places within a dreamlike landscape, each in search of the Grail; and Scars, a five-movement work for violin and piano based on poetry by Ioana Galu. He is currently at work on his second electronic opera, N.D.E., a comedy-drama about an aging rock star facing death and coming to grips with his checkered past. The most recent recording of Mowrey’s compositions is the album Music in Honor of Joseph Campbell (linked on this site), which features The Hero’s Path: Three Piano Pieces as well as the four-movement electronic ballet The Masks of God.

Mowrey has also written dozens of orchestral arrangements for classic rock musicians, including Jon Anderson (of Yes), Styx, Jefferson Starship, Donnie Iris, and Billy Jonas. These have all been performed by the artists themselves accompanied by various orchestras in the United States, Europe, and South America; several of these concerts have also been broadcast worldwide on HDNet and other networks. The Styx arrangements are available on both the CD/streaming and DVD/Blu-Ray/Amazon Prime Video versions of One with Everything, featuring the Contemporary Youth Orchestra of Cleveland.

As a pianist, Mowrey is a member of the chamber trio Modern Muse with Carrie deLapp Culver, soprano, and Denise Rotavera-Krain, flute, which has performed across the United States. In addition, Mowrey is working on a multi-disk recording of the complete solo piano music of Dmitri Kabalevsky (1904–87), excerpts of which may be streamed from this site.

A passionate movie buff, Mowrey also writes about film. His first book is Award Winning Films: A Viewer’s Reference to 2700 Acclaimed Motion Pictures (McFarland & Company, 1994). His second book, tentatively titled The Hero’s Trail: Mythmaking in the Classic American Western, is scheduled for release in late 2020 or early 2021. Mowrey is planning a second volume on the Western that will follow the history of the genre from the 1960s to the present day.

As a Professor at the College of Wooster, Mowrey teaches music theory, composition, piano, and electronic music. He has been at the College since 1997, and recently completed a three-year term as Dean for Faculty Development (2016–2019). Mowrey holds a Bachelor of Music degree in piano performance and a Master of Music in composition from the University of Georgia, and a Doctor of Music degree is from Indiana University.