Before coming to Wooster, she taught at the University of Maryland, the University of Minnesota, Humboldt University Berlin, and Gustavus Adolphus College. She specializes in cultural production in the 19th and 20th centuries, travel writing, colonialism, visual culture, and interdisciplinary approaches to literature.

She also enjoys spending time with family, cooking, reading, walking in the woods, playing the mandolin in the band “Frodo and Friends,” and practicing Ashtanga yoga regularly. She teaches yoga to faculty and staff in the College Wellness program. 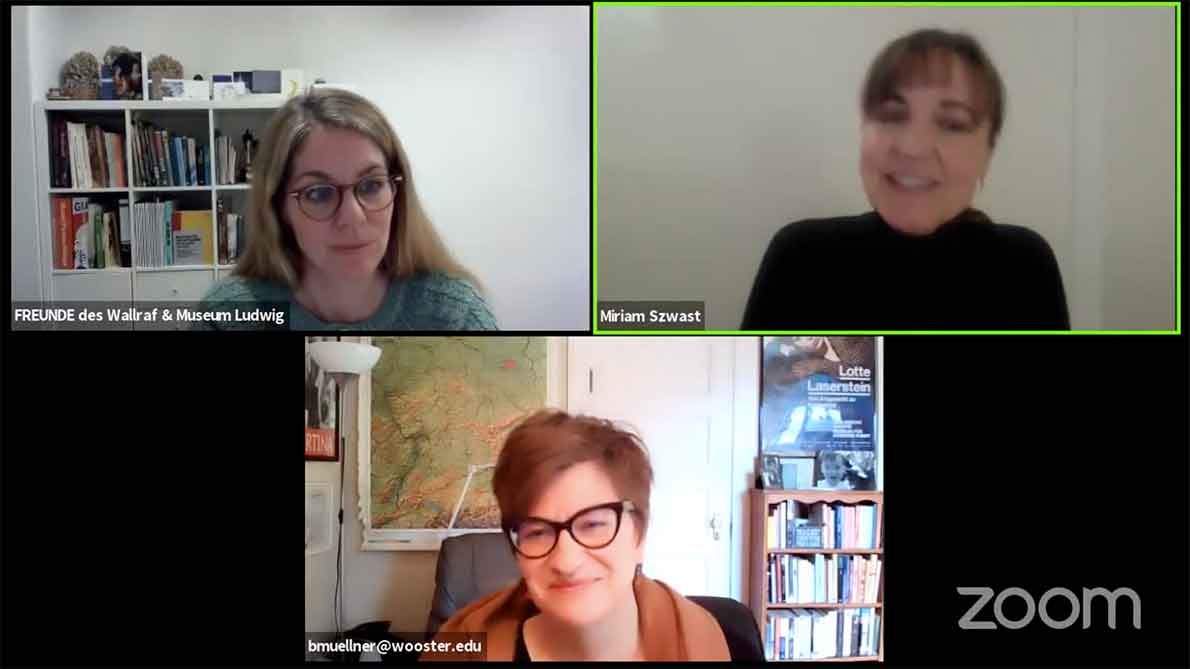 Beth Muellner, chair of the German Studies department and professor of Russian Studies at The College of Wooster, delivered a virtual public lecture that is now available on YouTube at the Museum Ludwig in Cologne, Germany on Jan. 19 entitled “Sisi’s Photo Albums Revisited.” Muellner discussed the collection of portrait photographs, or carte de visites, that the Empress Elisabeth of Austria kept from 1860-1864. The collection, from which the Museum Ludwig holds 18 albums, includes photographs of nobility, celebrities, and artworks and is on display in the museum’s exhibition “Sisi in Private: The Empress’s Photo Albums” until Jan. 24.

In her lecture, Muellner discussed the role that photography played in the lives of royal women. “The practice of keeping carte de visite collections as a seemingly quotidian activity allowed royal consorts to potentially feel more connected to their subjects and gave them a sense of agency, as well as projected ideas about they might determine their own self-representation,” Muellner explained. “Studying the history of photography offers insight into a sort of agency on the part of royal women in constructing their own self-image, beyond the otherwise controlled world in which they were forced to navigate as royal consorts, where their bodies were really not their own.”

Muellner noted that the stories of royal women and their photograph collections have historically been undervalued. “From a scholarly perspective, the carte de visite was long an overlooked type of photograph that was considered repetitive and predictable, popular and commercial,” Muellner explained. While on leave from Wooster in 2008-2009, Muellner traveled to Vienna and the Museum Ludwig to research the lesser-known history of Empress Elisabeth’s collection. “Exploring and working in archives and historical locations such as these are like traveling into the past, and are a great inspiration for uncovering hidden or lost stories, in particular of royal women, whose stories have long been suppressed and ignored,” she said.

Muellner’s 2010 article, “The Empress Elisabeth of Austria and her ‘Untidy’ Collection” published in a special issue of Women’s Studies: An Interdisciplinary Journal, was the first scholarly analysis of the album collection, and led to curator Miriam Szwast’s invitation to Muellner to speak. Muellner is currently working on a book about another royal woman called Working the Gilded Cage: The Life and Writing of Poet Queen Carmen Sylva aka Queen Elisabeth of Romania (1843-1916).