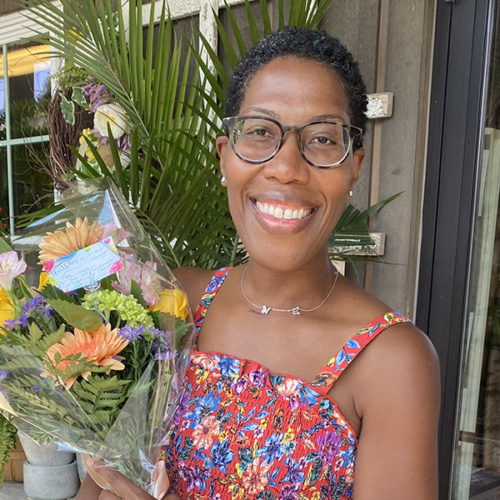 Dr. Thompson’s interdisciplinary training and research draw together the fields of Black (Women’s) Studies, American Studies, Women’s and Gender Studies, and Literary Studies. Her writing has appeared in Palimpsest: A Journal on Women, Gender, and the Black International; Women, Gender, and Families of Color; Africology: The Journal of Pan African Studies; Feminist Media Studies; and the International Journal of Africana Studies.  Dr. Thompson’s teaching interests reflect her concern with literature, popular culture, progressive politics, social constructions of identity, and cultural representations of race and gender. Her courses are discussion-based and designed to foster ideological diversity and critical thinking. She encourages her students to ask questions, think independently and creatively, and consider competing perspectives.

In this course, we examine African and African American Studies (Black Studies) as a legitimate field of scholarly inquiry and enterprise within the academy. In addition to exploring the development of the field and its significance, we consider some of the theoretical and philosophical perspectives that undergird the field and the shared and nuanced ways that people of African descent have used their agency to bring about social change. We explore some of the ways in which the politics of race, gender, class, and sexuality inform Black Studies and some of the sociopolitical issues that continue to dominate the field.

In this introductory, writing-intensive course, we consider the development of Black Women’s Studies in the United States. Specifically, we explore the intellectual, political, and theoretical contributions of African American women who often critiqued their collective plight while demonstrating personal agency and a keen awareness of politics and social mores. We examine the ways in which race, gender, class, sexuality, and other markers of difference influence African American women’s lived experiences and social realities and their pursuit of equality by paying close attention to how they have often interrogated, challenged, and resisted subordination and misrepresentation. We rely on scholarship that is grounded in the Black (feminist) intellectual tradition in order to better understand the multidimensional nature and complexities of Black womanhood in the present and the past.

This course interrogates representations of blackness in American popular culture. Using an interdisciplinary lens that considers the social, political, cultural, and historical realities that inform popular culture, we investigate how blackness is constructed and its implications. We create a sense of community based on genuine curiosity, a shared commitment to exploring blackness in American popular culture, and a willingness to examine widely held assumptions and misconceptions. We develop a greater awareness of how blackness is represented in contemporary American (popular) culture, particularly within the film and music industry, as we formulate independent and thoughtful critiques of these various representations.

This interdisciplinary course explores constructions of Black masculinity in the United States from the age of slavery through the present. As a result of actively participating in the course through meaningful dialogue, serious engagement with the readings, and independent preparation, students should be able to investigate the historical and contemporary representations of Black manhood in the media, popular culture, print culture, and visual culture; engage in constructive and continuous dialogue about the way(s) in which representations of Black men have shifted and/or remained consistent in American culture and society; examine political, economic, social, and cultural factors that influence definitions of Black masculinity; and demonstrate an understanding of the relationship between mainstream perceptions of Black men and the realities that Black men experience in their daily lives.

In this course, we examine representations of Africa from the perspectives of African writers. More specifically, we consider historical depictions of Africa as a metaphor for exoticism, sexuality, and savagery in Western discourse and as an imagined site of seemingly unsolvable problems in the contemporary world. As a result of actively participating in the course through serious engagement with the readings, meaningful dialogue, and independent preparation, students should be able to analyze the different ways in which the continent of Africa and Africans have been depicted in the fiction of African writers; demonstrate an awareness of how the literature produced by African writers challenges and/or reinforces some of the mainstream perceptions of Africa and the cultures and traditions of African people; acknowledge the ways in which Africans have responded to the dominant narrative that represents the West as superior and Africa as inferior; and explore what it means to reimagine Africa and its diverse cultures and people in ways that generate new insights and a deeper understanding of the cultural, political, economic, raced, and gendered complexities that inform the experiences of continental Africans and Africans across the diaspora.

Black Autobiography in the US (300-level)

In this course, we consider the life writings of African Americans living from the 19th through the 21st century. We explore the Black experience from the vantage point of men and women who struggled to negotiate their racialized and gendered identities in a society that often denigrated both. Historically, Black

women and men were prevented from exercising a voice. In The Signifying Monkey: A Theory of African- American Literary Criticism, Henry Louis Gates describes the struggle of Blacks historically to write themselves into being, that is, to accord legitimacy to their racialized, gendered, and multifaceted selves. As one of the few legitimated forms of expression to which Black people had access, autobiographical writing took on critical importance for Black men and women. We examine the ways in which the life writings of Black men and women not only facilitated freedom of expression but served as a form of resistance by challenging the status quo.

In this course, we examine the experiences of Black women as expressed in their personal narratives in an effort to learn more about their political lives during the twentieth and twenty-first century. Using their life writings as a primary lens, we explore the different dimensions of their activism in the context of the US, South Africa, and Kenya. Ultimately, we consider how their efforts—in the words of Mary McLeod Bethune —“to build a better world” contribute to and/or complicate a broader narrative of Black women’s tradition of resistance in the US and beyond.

In Talking Back: Thinking Feminist, Thinking Black, scholar-activist bell hooks describes “coming to voice” as the act of speaking and being heard. In their literary texts, Black women writers routinely participate in this process by representing the lives of women in complicated and nuanced ways that challenge dominant constructions of Black female identity. For Black women, the struggle to articulate an unmediated voice remains a critical part of defining and affirming their multiple identities. In this course, we explore the literary contributions of 20th century African American women fiction writers using Black feminist literary theory as a lens. More specifically, we examine the shared and distinctive ways in which Black women writers represent the politics of Black womanhood in their short stories. The short story genre is an essential part of the Black women’s literary tradition that is often left unexplored. Taken together, these texts contribute to a radical tradition that implores readers to consider the way(s) in which race, gender, class, sexuality, and/or other markers of difference inform the fictional lives of Black women and the lives of the writers.

In this advanced course, we explore the literary and nonliterary writings of Toni Morrison and some of the literary criticism that surrounds her work. As a result of actively participating in the course through meaningful dialogue, serious engagement with the readings, and independent preparation, students should be able to examine Morrison’s treatment of race, gender, class, sexuality, (dis)ability, social mobility, power, and privilege in her novels, critical essays, interviews, and speeches; engage in fruitful and continuous dialogue about Morrison as an acclaimed American writer, public intellectual, cultural critic, and unapologetically Black woman; demonstrate a growing consciousness of the social, political, and cultural contexts that inform Morrison’s writing and, more broadly, the Black literary tradition; and analyze the way(s) in which Morrison’s complex constructions of Black identity challenge and subvert mainstream notions of blackness as monolithic and marginal.

In this version of the senior seminar, we focus on the intersections of race, class, gender, and sexuality in the lives of women of color globally and trace how identity politics and (Black) feminist ideology inform resistance to racism, classism, sexism, homophobia, and other types of inequality that undermine justice.

Africa and the Diaspora (400-level)

In this comparative and interdisciplinary course, we examine some of the achievements and challenges of people of African descent. We consider the Black experience globally and analyze the ways in which intersections of race, gender, class, and other markers of difference complicate it. This course emphasizes concepts, theories, and themes central to the African Diaspora, engenders a critique of the ways in which knowledge is disseminated and produced, and promotes a comprehensive knowledge of the discipline, its core concerns, and its methodologies.

“Lifting as We Climb:” Black Women’s Legacy of Struggle in the US

Lives that Matter:
Exploring the Origins, Development, and Trajectory of the Black Lives Matter Movement

James Baldwin
What Moves at the Margin: Women Writers of Color in the US Writing the African Diaspora

“Beyond the Pale of Acceptability: Black Womanhood and the Soft Checking of Otherness.” International Journal of Africana Studies 21:1-2 (2020): 101-25.

“No Choice but to Strive:” Gender, State Power, and Resistance in the Narratives of Emma Mashinini, Mamphela Ramphele, and Wangari Muta Maathai. Palimpsest: A Journal on Women, Gender, and the Black International 7.1 (2018): 19-47.

“If There Is Common Rough Work to Be Done, Call on Me:” Tracing the Legacy of Frances Ellen Watkins Harper in the Black Lives Matter Era. Africology: The Journal of Pan African Studies 12.10 (2019): 93-109.

“The Gift of Giving: The Golden Rule Variation.” What Do You Stand For?: Stories About Principles that Matter, ed. by Jim Litchman (Palm Desert: Scribbler’s Ink, 2004)

The Teaching Fellow program offers those yet to begin a professional career a program of guided classroom work, professional seminars, and exposure to the theories and methods of experienced teaching faculty. In considering candidates for the Andover Teaching Fellowship, the school values academic excellence together with competencies complementary to the school’s Constitution and Statement of Purpose and to the Academy’s commitment to fostering a global, diverse, and inclusive academic community.

The Institute for Recruitment of Teachers (IRT) empowers talented underserved and underrepresented future educators to teach and serve as leaders in American education because diversity is essential to excellence.

The Undergraduate Fellowship Program aims to increase the number of talented, intellectually engaged undergraduates who choose to enroll in Ph.D. programs in the humanities, designated sciences and social science disciplines. This program is interested in students at the sophomore level who have a serious interest in pursuing the Ph.D. and becoming college professors in one of the Mellon designated fields.