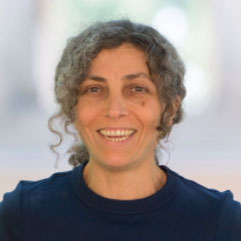 Painter, printmaker and installation artist, Mangubi works on thematic projects that probe hidden meanings in familiar historical and philosophical constructs. Her recent project, titled Painting Biathlon, launched at the Olympic training center in Canmore, Canada, in 2015, was inspired by modern biathlon, a military sport combining Nordic skiing and marksmanship. Her work has been exhibited in the United States and internationally, including Germany, Russia, Japan, Malaysia, Belarus, Uzbekistan, Albania, Argentina, Spain, France, and Canada, and is in permanent collections of the Portland Museum of Art in Maine, the Gilkey Center for Graphic Arts at the Portland Museum of Art in Oregon, Kala Institute in Berkeley and Universiti Sains School of the Arts in Penang, Malaysia. Marina Mangubi has participated in numerous residencies, including the Banff Centre Leighton Colony, and was the artist fellow at the Camargo Foundation in Cassis, France. Her projects have been profiled on national television in France and Russia.