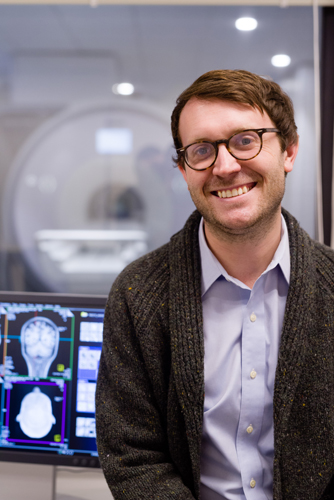 WOOSTER, Ohio — Neuroscientists have long wondered what allows the human brain to produce and understand language, but a groundbreaking study by Steven Frankland and Joshua Greene is providing valuable new insight into the process.

Frankland, a 2007 graduate of The College of Wooster and a recent Ph.D. recipient at Harvard, and Greene, professor of psychology at Harvard, summarized their findings in a paper so noteworthy that renowned cognitive scientist, psychologist, and linguist Steve Pinker called it “the most important finding in cognitive neuroscience in many years.” Titled “An Architecture for Encoding Sentence Meaning in the Left Superior Temporal Cortex,” the paper was published last fall in the journal Proceedings of the National Academy of the Sciences.
“Almost every sentence we hear or produce is a novel combination of familiar words,” says Frankland, “Our brains must have a way of taking these re-usable words and putting them together to form new meanings.” For example, the two sentences, “the baby kicked grandpa” and “grandpa kicked the baby,” include the same words, but the meaning of each is significantly different. How then does the brain represent who did what to whom?
“Since many sentences are novel, you couldn’t possibly have neurons in your brain waiting to encode the meaning of each particular sentence you could encounter” says Frankland. “There has to be some general system that flexibly combines these words on the fly, and does so in a way that makes sense of the sentence, keeping track of who did what to whom. This ability to flexibly re-combine familiar ideas is central to what makes human thought and language so special.”
In an effort to better understand the process, Frankland and Greene used a functional MRI (Magnetic Resonance Imaging) instrument to track changes in blood flow in individuals as they read the various sentences. This amount of blood flow closely tracks the amount of neural activity in a brain region. They then applied a pattern classification algorithm in an effort to determine how the meanings of these sentences are conveyed by specific patterns of neural activity. “What we found was very exciting,” says Frankland. “The left superior temporal lobe of the brain, near the left ear, apparently has smaller sub parts that are devoted to encoding different aspects of the sentence’s meaning, such as ‘who did it?’ ‘what was done?’ and ‘to whom was it done?’ In this way, the structure of the sentence is systematically mapped onto the anatomical structure of the brain.”
Some say that this structure is like an algebraic expression because the brain seems to have some system for changing variables. “In an abstract way, certain mental processes, like language comprehension, resemble a computer program in which the mind defines variables, such as ‘who did it?’ ‘what was done?’ and updates these variables as needed to encode different sentence meanings, including new and unfamiliar ones,” says Frankland. “Even though brains and human-made computers are made of very different hardware, they seem to solve this problem in a similar way.”
Frankland, who majored in psychology and philosophy at Wooster and had one of the highest academic standings in his class, says that the College’s commitment to undergraduate research and its notable emphasis on writing set the tone for his prolific post-graduate success.
“Wooster gave me a number of exportable cognitive skills,” says Frankland. “The emphasis on effective writing and communication, and on independent work have been incredibly helpful.”
Frankland, who grew up in Coshocton — just over an hour south of campus — says that his joint major encouraged him to ponder questions deeply and to think critically. “In the sciences, and in most other things you might do, really, you have to be willing to keep learning. And sometimes not just learning new facts, but new conceptual frameworks.” he says. “I think one of the most important parts of my experience at Wooster was really learning how to learn. I was fortunate to have many great professors who helped me develop cognitive skills that are broadly useful across intellectual domains.”
Frankland is so enamored with research that he plans to remain in that capacity for the foreseeable future. “When you do research, you often raise more questions than you answer,” he says. In the meantime, he plans to continue applying his innate curiosity and Wooster-bred critical-thinking skills to the many fascinating questions surrounding the brain and how it functions.