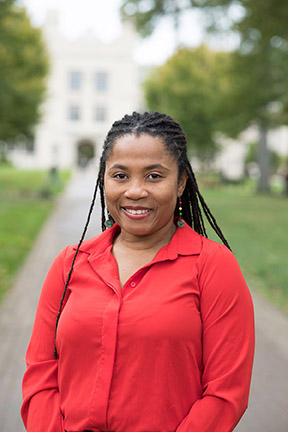 WOOSTER, Ohio – Nicosia Shakes, assistant professor of Africana studies at The College of Wooster, was selected as winner of the National Women’s Studies Association/University of Illinois Press First Book Prize for her proposed book, “Gender, Race and Performance Space: Women’s Activism in Jamaican and South African Theatre,” it was recently announced.
The NWSA/UIP First Book Prize is awarded annually for the best dissertation or first book manuscript by a single author in the field of women’s and gender studies.
“Gender, Race and Performance Space” is an expansion of Shakes’ dissertation, previously honored with the Joukowsky Family Foundation Outstanding Dissertation Award (humanities) and the Marie J. Langlois Dissertation Prize from the Pembroke Center at Brown University, where she earned a Ph.D. in Africana studies. The book examines theater groups, formed and operated by women of African descent, and how their performances create feminist thought through feminist practice. The groups are, Sistren Theatre Collective and the Memory, Urban Violence and Performance Project, based in Jamaica, and the Mothertongue Project and Olive Tree Theater Company, in South Africa.
“My main argument is that theater is one of the best ways to represent women’s life experiences … that’s what I want readers to leave with,” said Shakes, a Jamaican scholar and artist who has been involved in theater for about two decades as an academic researcher, playwright, and performer. “(The book) focuses on different kinds of women … using their performances to talk to people about women’s rights.”
Shakes spent 16 months in Jamaica and South Africa conducting interviews, reading scripts, and analyzing performances. She noted that the breakthrough scholarship compares a Caribbean country and an African country, “which you don’t see much of in current scholarship about women’s theatre groups.”
Shakes, whose play, “Afiba and Her Daughters,” premiered at Brown’s Rites and Reason Theatre in Providence, R.I., in 2016 and will be staged next at the University of the West Indies’ Phillip Sherlock Centre for the Creative Arts in Jamaica in 2018, hopes to complete the book by 2019. After that, she plans to expand on her ongoing theatre research, in addition to other areas such as popular culture and black radicalism in the Caribbean.
In announcing Shakes as the prize winner in the first book category, the NWSA praised her manuscript stating, “(she) consciously roots the themes of theater activism, performance, and aesthetic labor in the broader non-disciplinary field of political pedagogy and in embodied engagements with questions of empowerment. In so doing, the author offers fresh avenues to engage with questions of racialized and gendered violence while pushing us to see theater as a crucial anti-disciplinary site of feminist knowledge making.”
Shakes, in her first year as a faculty member at Wooster, will formally be recognized at the NWSA’s annual conference in Baltimore, Md., on Nov. 17.