WOOSTER, Ohio – Rose Taylor, a chemistry and math double major from the Chicago area, and Chris Good, a chemistry major and math minor from Pittsburgh, spent their summer working as research interns at Dow AgroSciences, a division of the Dow Chemical Company with global sales of $6.2 billion and more than 9,000 employees worldwide. More than 1,600 undergraduates from around the country applied for one of the 12-week, paid positions, and fewer than three dozen made the cut, including the two rising Wooster seniors, who found themselves working alongside students from much larger schools, including Purdue, the University of Illinois, and the University of North Carolina.

“I’ve always known I wanted to get experience on the industry side, not just in academic research,” Good said. “Dr. [Paul] Edmiston came up to me last fall and said, ‘You know, a few Wooster students have gone to Dow AgroSciences, you should apply.’ So, I did.”
He and Taylor had to submit resumes, details of past work experiences, and references, and after several rounds of review, both emerged as finalists for 30-minute phone interviews with the specific departments that were interested in them. Taylor was hired by the discovery chemistry group, while Good ended up on the mass spectrometry team, which is led by Jeff Gilbert ’85, a 28-year Dow veteran. Gilbert knows first-hand the value of getting real-world experience as an undergraduate, having interned at Owens Corning when he was at Wooster.
“I heard a lot about him when we first got here,” Taylor said. “People kept coming up to me and saying, ‘Oh, you must know Jeff.'” She soon did. “A couple of weeks in, he emailed and the three of us had coffee and talked for an hour.” The conversation covered a range of topics, from I.S. and career plans to Wooster athletics: Good runs cross-country and track, while Taylor has played both lacrosse and field hockey at Wooster. (Gilbert’s daughter is a high school lacrosse player, who he’s hoping will give his alma mater a look.)
Working in the mass spectrometry group, Good ended up seeing considerably more of Gilbert. “I talk to him almost every day, and learn something new. He’s asked me to present at some of his meetings. He’s just been really interested in us.”
“Chris has been working with some of the best people in my group,” said Gilbert, who has a Ph.D. in analytical chemistry from Michigan State. “He came in very well prepared, and he’s a super self-starter.” Not that Gilbert was surprised. He’s had a half-dozen or so Wooster students intern in the mass spectrometry group over the years and “to a person, they’ve been very independent, self-starters, to a degree you don’t get everywhere else.”
In addition to running samples himself on sophisticated instruments that cost a half million dollars apiece, Good’s primary project for the summer involved creating a centralized database of thousands of those mass spectrometry sample results from three separate platforms “that don’t coexist.” Taylor did organic synthesis of compounds to test for weed management potential. They and the other interns also participated in weekly lunch and learns, at which scientists from different areas of the company would come and talk about what they do.
For her senior I.S. project, Taylor will be “looking at the kinetics of the breakdown of the active ingredients of sunscreen products in UV light,” mentored by Prof. Sarah Sobeck in the chemistry department, and Prof. Drew Pasteur in mathematics. Good will be working with Prof. Edmiston, analyzing the concentrations of various chemical contaminants in the water in Hawaii and how they are affecting certain fish populations.
The summer experience at Dow AgroSciences has given Good a new appreciation for the communication and writing skills he’s developed at Wooster. “I never really noticed it until I did it in the real world,” he observed toward the end of his internship. “I had to do a 20-minute presentation last week, and there’s no way I could have done that without the experience I’ve had in the chemistry department.”

Posted in Experiential Learning on August 18, 2018. 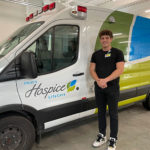 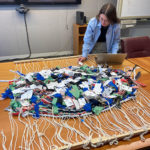 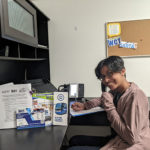