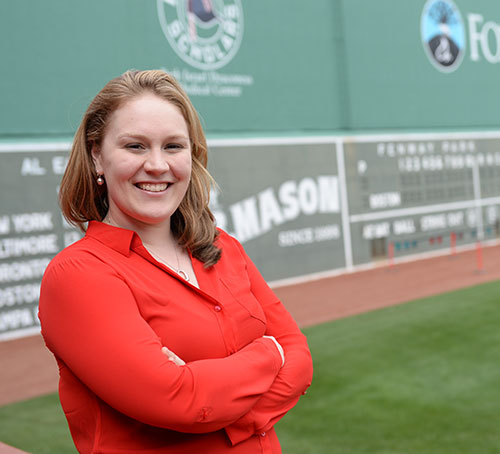 “It was a bit of a leap of faith as a New Englander to come to Ohio,” Sarah Coffin says, “but it was the best decision I’ve made in my young life. I wouldn’t be where I am now without Wooster.”
Where she is now is at the intersection of two passions, for history and baseball. As the curator for the Boston Red Sox, Coffin spends her days immersed in the artifacts, photos, and ephemera of one of the game’s most storied franchises. At any given time, about 500 of those artifacts are on display at Fenway, but there are thousands more carefully catalogued and stored off-site. “Probably the best part is just seeing how people react to the displays that you create,” she said in a recent video profile on MLB.com. “I know that I’m helping bring this history to life for generations that maybe weren’t here to see Ted Williams and Johnny Pesky and Bobby Doerr.”
For a life-long Red Sox fan who grew up 30 miles north of Boston, it’s hard to imagine a better gig.
Coffin’s love of history began as a child. Her mother worked at a small history museum and, she says, “I did all the programs: Victorian, colonial, Civil War, you name it.” She was drawn to Wooster because of the strength of the history department, and because she knew she would be doing “real, concrete, research-based learning.”
The summer after her first year at Wooster, Coffin spent eight weeks on campus, working with one of her professors and the Wayne County Historical Society to develop a local history exhibit for the public library in downtown Wooster.  The following summer, she had a job at a history museum back home in Massachusetts. By the time senior year began, she was well prepared to embark on an ambitious research project for her I.S., working one-on-one with her faculty mentor. The result was Fear, Riots and Rebellions: The Civil War Draft Riots in New York, N.Y. and Holmes County, Ohio, an 80-page thesis plus a 25-piece public history exhibit.
The day she turned in her senior project, Coffin had a phone interview (thanks to a lead from the history department) that landed her a post-graduation summer internship at the National Baseball Hall of Fame and Museum in Cooperstown, N.Y. She found out later that the internship was typically reserved for a graduate student, “but they told me that I had already done graduate-level work.”
Coffin says that the president of the Hall of Fame was “very accessible to the interns” and when she mentioned one day that she was interested in moving back home at the end of the summer, and wondered if the Red Sox might be hiring, he said he would make some calls. At first the answer was no, but a few weeks later she got an informational interview.
Coffin brought along her I.S., as well as the exhibit catalog she had created for her senior project. What she didn’t know was that just two days earlier, the person interviewing her had gotten the go-ahead to hire someone new, an archival assistant to help get ready for the big Fenway anniversary. “We got to the end of the interview and he said, ‘So, any chance you’d want to work here?’”
The rest is…well, you know.
Coffin says the research experience she gained at Wooster is absolutely essential in her work, and not just in the obvious ways. “Every day I get questions — from do we think this would be a good exhibit topic to how do we update our collection storage — and I don’t know the answers. But if you know where to find the answers and how to go about it, that’s what you need, and Wooster taught me that.”
While working for the Red Sox, Coffin has earned her master’s degree in museum studies at Harvard through their Extension School. Long term, she says she would like to work in leadership at a smaller museum.
“I want to help small museums stay on their feet. There’s so much rich history out there, so many historic resources that have challenges with funding, with outreach…. I will be satisfied knowing I am really helping preserve a piece of history and helping the community appreciate it.”
But all that is in the future. Right now, Coffin says, “I don’t foresee myself leaving Fenway anytime soon.”