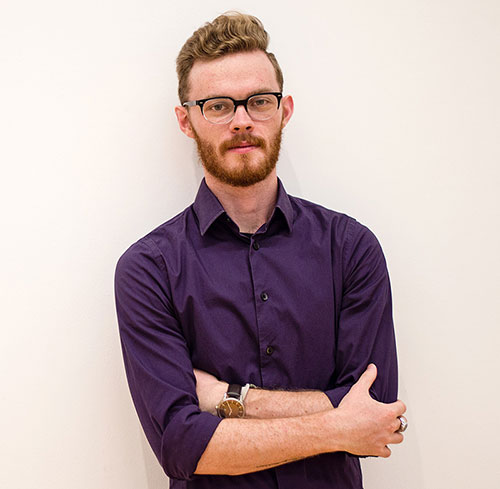 James May’s musical interests began in the punk and alternative genres, then broadened widely to include everything from rap to traditional Irish. Today, the 24-year old is an award-winning composer who has created more than 20 original compositions and is furthering his studies as a George J. Mitchell scholar at University College Cork.
Just 12 Americans are annually awarded a Mitchell Scholarship for a year of postgraduate study in Ireland. It is named in honor of the distinguished U.S. Senator from Maine’s contributions to the Northern Ireland peace process. May is the first Wooster graduate to be a Mitchell Scholar in the 19-year history of the program, and he called it “the highest compliment to be selected.”
May’s transition from Green Day to orchestral music came prior to Wooster, but the Pittsburgh native’s time on campus fueled his passion for additional discovery and education, as he found “a really strong music program … (and that) there was still space and time to explore other disciplines.” He paired music theory and composition with English for a double major, earned Phi Beta Kappa honors, and studied in Belfast, Northern Island, as a Fulbright grant recipient, all while exploring his musical talent as a student manager for the Wooster Chorus, a pianist in the Wooster Jazz Trio, and an organizer of the first Wooster New Music Showcase.
May credits the department of music and the College as a whole in part for his early career achievements. “Wooster is a rigorous school and it gave me so many tools, both from a technical musical standpoint and from a social and emotional environment standpoint. It set me up for success in grad school and beyond,” he said.
Top works by May, who already has a master’s degree in music composition from the University of Louisville, include “The Garden,” which received a prize from the San Francisco Choral Artists 2017 New Voices project, and “Zaira and Irene,” a full orchestra score that premiered at Louisville’s New Music Festival on Nov. 7. In addition to choral and orchestra compositions, he has also written chamber music and solo pieces, and his music often addresses socio-political topics, such as Native American rights and violence.
“As a composer, I’m very, very invested in the performance and creation of contemporary music. One of the things I’ve found is that I really enjoy the process of directing and rehearsing … I enjoy the writing side as well, but want to make things happen,” May explained. “It’s sort of a trend in contemporary music to not be beholden to the large symphony orchestras because it’s so hard to get a foot in the door with new music … and now it’s more a do-it-yourself approach to classical music. This is a really exciting development.”
That aligns with Cork’s music department, which “pushes the parameters of the classical tradition of collegiate music study,” according to May. “In most programs, you might see one elective in the area of sound art and it may only briefly touch on the more contemporary experimental practices, such as live improvisation, field recordings, or building digital instruments. In my current course, these are the entire focus, so I’m receiving an amazing experience getting my hands dirty with these practices,” he added.
When May’s year as a Mitchell Scholar concludes, he plans to relocate to New Orleans, where he’ll work, teach, compose, and perform, and a Ph.D. program is also likely in the future. Follow May’s career at jamesmaycomposer.com.