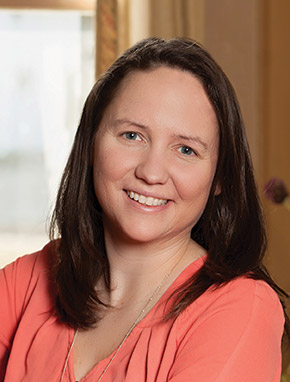 Recently promoted to partner at RCO law, a regional law firm in Toledo, Ohio, Sarah (Fisher) Corney ’06 says her writing abilities led to her legal career, though at Wooster her writing was more creative in nature. Her I.S. told the stories of the women in King Solomon’s temple in the Bible from their own perspective, an idea that took shape after a conversation with her advisor, Daniel Bourne, Flo Kurtz Gault Endowed Chair in English. “I had this glimmer of an idea that he brought to life for me,” she said, explaining that he suggested she write persona poems from the voices of the women themselves.
Writing with different perspectives in mind remains a skill that Corney, who thought of herself as a small-town girl before she came to Wooster, still uses today. “One of the things that I took from Wooster is the ability to interact with and to cherish people who are different than I am,” she said, referencing opportunities to travel to the Ukraine, an internship in Connecticut, and studying abroad in Nantes, France. “Sitting and having a long conversation with people I haven’t met before is what I do now on a daily basis.” As an attorney in estate planning, she’s frequently learning about the intimate details of her clients lives in their first conversation. “After 1-2 hours, I put together a plan for what it might look like for their children and their family if they passed away. I know how to get to know people really, really quickly, and it’s not a specific type of person. It’s all types of people.”
Understanding her clients and their families is something Corney has come to appreciate about her work as an attorney. “That surprises me,” she said. “I got into it because I knew how to write, and I still love writing, but if I had to pick a part of my day, I prefer the part where I’m sitting and talking with a recently-widowed client over the part where I’m drafting.”