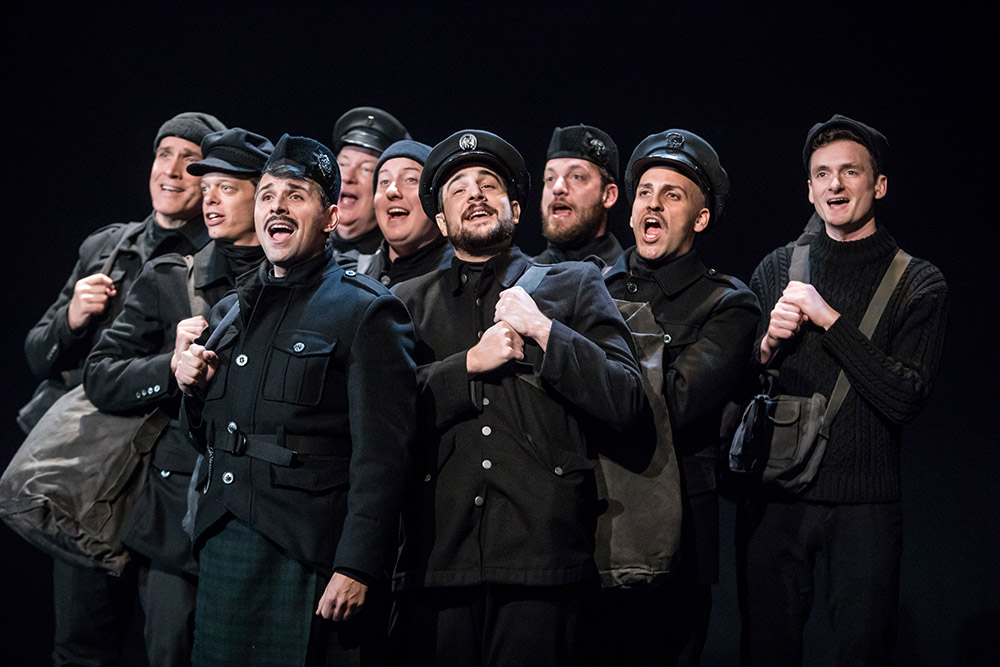 The musical All Is Calm: The Christmas Truce of 1914, co-produced by College of Wooster Trustee Mary Beidler Gearen ’79, will be filmed before a live audience this December for broadcast on PBS for the 2020 season. Beidler Gearen learned about the production during her service on the board of Theater Latté Da, a musical theatre company in Minneapolis, where the production was first developed. The musical tells the story of the Christmas Truce of 1914 during World War I, when Allied and German soldiers put down their weapons, met in “No Man’s Land,” and celebrated the holiday together, singing carols, sharing food and drink, playing soccer, and burying the dead.
“It really explores the range of human capacity for good and for ill, that moment when you put your humanity and tradition literally in the bare open line of fire,” said Beidler Gearen. “Being filmed for PBS means that this magnificent story, beautifully told, is now available to our nation. It’s so important because it reminds us of our capacity for good and the costs of war.”
Written by Peter Rothstein, founder of Theater Latté Da, the a cappella production features a cast of 10 actors/singers, blending iconic WWI patriotic tunes, trench songs, medieval ballads, and Christmas carols from England, Wales, France, Belgium, and Germany with musical arrangements and vocal arrangements by Erick Lichte and Timothy C. Takach. As co-producer, Beidler Gearen “wanted to do everything she could to support a successful run for the production’s off-Broadway debut in New York.” Playing at the Sheen Center in New York City the production won the 2019 Drama Desk Award for Unique Theatrical Experience and attracted the attention of Patricia Harrison, president and CEO of the Corporation for Public Broadcasting.
Studying theatre at Wooster, Beidler Gearen considers her Independent Study in many ways her first experience as a producer— “a facilitator that makes things happen.” A performance piece, her I.S. compiled ancient Greek plays, exploring war and women in two performances at 11 p.m. outside McGaw Chapel. Under the full moon, she played five different roles and directed a female chorus, fellow actors, and musicians. “It was a pretty magical moment,” she said, “but I had to really be resourceful. It started with an idea, some opposition, and some support, and I had to find a way. That blend of resistance, support, and my own determination taught me how to get something done by pulling from all different quarters.”
Using that resourcefulness she developed through I.S. drives Beidler Gearen in her work as a producer. “I learned to hold onto an idea and also to see the ideas in others. My passion is for developing new work, and that’s essentially what I did with my I.S.” In the same way, she sees All Is Calm as a “great idea” that she was able to support in its initial off-Broadway run. Directed by Rothstein with music direction by Lichte, the musical will be performed by the Minneapolis-based cast, the majority of whom starred in the off-Broadway run for the recording. The filming will take place this December at Theater Latté Da’s Ritz Theater in Minneapolis during four performances and will be available for all national public television affiliates for broadcast in 2020.
Photo from ‘All Is Calm’ by Dan Norman, courtesy of Theater Latté Da, www.latteda.org