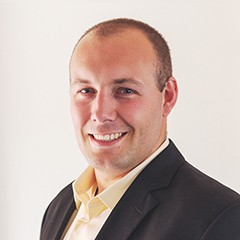 After a childhood spent visiting The College of Wooster’s campus due to family connections—his father is a fellow alumnus of the college, class of 1972, and his grandfather, J. Garber Drushal, was the eighth president of the College—Rick Drushal ’07 did not plan to attend the school to receive his undergraduate degree. But he realized that the opportunities that Wooster provided were what he wanted in a college, and he chose the school that already “felt like home.”
Graduating with majors in mathematics and computer science, Drushal enjoyed the liberal arts background that Wooster provided him; “it allowed me to double major in two hard subjects and also gain exposure into other areas; I wasn’t shoehorned into just a computer science school,” he said. The ability to explore different interests was important to Drushal, as he did not decide on a major in until his sophomore year. He credits multiple professors for helping him figure out what he wanted to do. John Ramsay, professor of mathematics, was one of the first calculus teachers he had, and Ramsay became “the person always present, willing to talk and work with me, and build a true connection.” He also laughed while remembering the time that Simon Grey, a former professor of computer science, showed up at the computer lab 15 minutes after receiving a late-night email from Drushal asking him questions about potential bugs in a class project.
During his time on campus, Drushal played football and participated in track and field. He feels that his time as a student athlete taught him how “to work, balance commitments, and plan [his] time,” which are all skills that he uses today as an engineering manager for Apple, as he oversees the work of eight people on his team while also managing his own work.
After college, Drushal was unsure what he wanted to do, and actually signed with the Cleveland Browns football team for a few days, until he was connected with Accenture (a technological consulting company) through a Wooster alumnus in Chicago. He consulted for Accenture for 6 years. Drushal later joined Silicon Valley Data Science, a startup as a data science and analytics consultant for four years until the company sold to Apple. “Wooster laid a foundation that allowed me to excel not just as a technical expert, but also gave me the ability to write, talk, and communicate, which is a huge benefit in consulting,” said Drushal. The majority of his work deals with specialized consulting for clients in data engineering. “I love solving problems, and my work is mainly looking at how you can quickly diagnose a problem that comes up and fix it,” said Drushal.
Ultimately, Wooster, and specifically his experience with Independent Study, gave Drushal the confidence he needs to excel in a professional setting. “Being able to accomplish something at that scale means that now there is no project in the working world that really feels daunting,” he said. A combination of mathematics and computer science, his I.S. was titled “What did one node say to the other? A study of inference in Bayesian Networks.”
Wooster has always been a special place for Drushal because of the family connection to the school. He has gone from living 30 minutes away from the campus, to living directly on campus for four years, to now living across the country in California, but he said, “When I come back, Wooster is still home.”