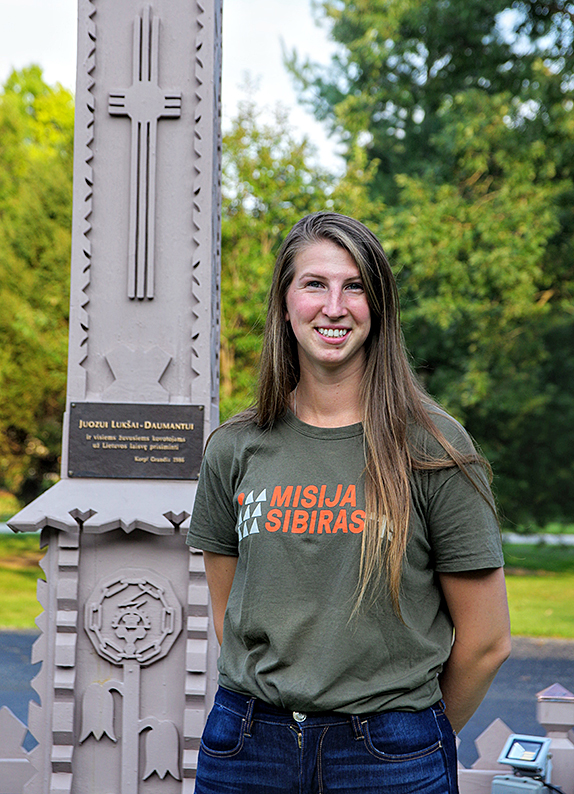 WOOSTER, Ohio – The Association for the Advancement of Baltic Studies announced College of Wooster graduate Marija Cyvas ’19 as one of its two winners of the 2020 AABS Undergraduate Paper in Baltic Studies Award. The biennial award recognizes academic papers on Baltic Studies based on originality, scholarship, excellence in writing, and quality of engagement with the subject area.
Cyvas’ winning paper was a slightly-edited version of the Independent Study she wrote while at Wooster, “What It Means to be Lithuanian in America and What Russia’s Got to Do With It: A Study of Ethnic Identity Formation Among Later Generations in a Diasporic Community.” Via 10 in-depth interviews of Lithuanian-American families, she researched and analyzed the experiences of first- and second-generation members of that community in order to better understand how they identify ethnically and how they make sense of their ethnic identity. She also examined the role of Russia and the former Soviet Union play in the formation and understanding of ethnic identity to this population.
“I was definitely very excited when I found out that I had won. I think most of (that) excitement stems from the fact that I spent basically a year working on I.S. and it was something I became very emotionally attached to,” said Cyvas. “The greatest part of Wooster and I.S. is that you can write and research a topic that you are interested in and want to learn more about. There were several points where I thought to myself … ‘Is it okay that I’m having this much fun researching this topic, conducting these interviews, reading all these articles?’”
Cyvas, who majored in sociology and Russian studies, has had a longtime fascination with the subject, having grown up as a member of the Lithuanian-American community in the Chicago area. There, she attended Lithuanian Heritage School, participated in Lithuanian song and folk dance festivals, and was an active member of the Lithuanian Catholic Federation.
At Wooster, Cyvas, a four-year member of the volleyball team and vice president of the Wooster Catholic student organization, was able to further explore her Lithuanian-American knowledge and passion through I.S. Her primary conclusion: “the unique historical circumstance, the shared experiences and history of the community, and a negative perception of Russia and its impact on Lithuania are the most influential factors in Lithuanian-Americans on the second emigration wave claiming Lithuanian identity, despite having been born and grown up in America.”
After graduating from Wooster, Cyvas was selected as one of 15 members for the 2019 Mission Serbia team, a youth initiative that strives to preserve Lithuanian history and pass on knowledge of it to the next generation of Lithuanians. She was just the third Lithuanian-American to be part of Mission Siberia in the organization’s 16-year history. Cyvas’ team went to Kazakhstan, and after the expedition, she returned to Lithuania and gave a series of presentations at schools, libraries, and other various organizations. More recently, she has given similar presentations throughout Argentina, Canada, and the U.S. before they were halted by the coronavirus.
The AABS, founded in 1968, is an international education and scholarly non-profit organization which promotes research and education in Baltic Studies by sponsoring meetings and conferences, supporting publications, and sustaining a program of scholarships, grants, and prizes.