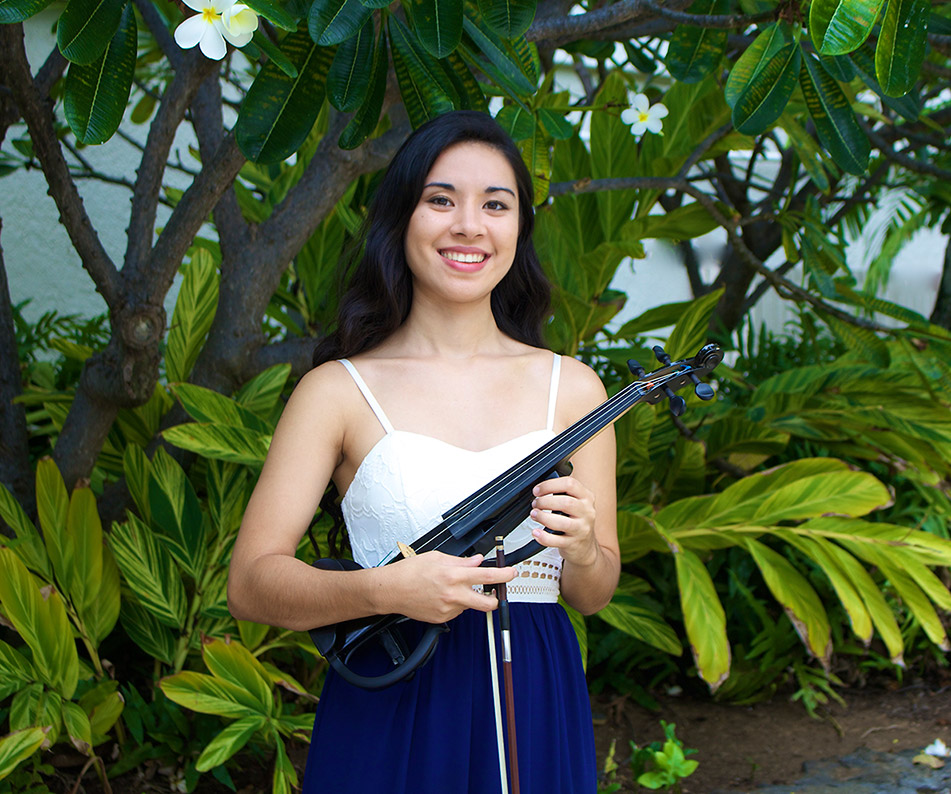 When she started playing the violin at 10 years old, Kimberly McDonough ’17 knew that she had found her calling. Since then, she has devoted her life to music. After majoring in violin performance at Wooster, she is currently making a career as a professional violinist, teacher, and composer through her business, Kimberly Hope Music LLC, in her home in Kauai, Hawaii. McDonough credited Thomas Wood, professor of music, and Ioana Galu, former professor of violin, for helping her become “a better violin player, performer, teacher, and learner.” Beyond the classroom at Wooster, she served as concertmaster of the Wooster Symphony Orchestra during her senior year, founded a string quartet called The String Sisters, accompanied music majors for senior Independent Study performances, and played solo gigs in the community.
The support McDonough received from not only her teachers at Wooster, but also fellow students, staff members, and residents of the town motivated her to pursue music as a career after graduation. “I am so grateful to have people who believe in me and encourage me to follow my passion,” McDonough said. “It is their faith and belief in me that has inspired me to continue to pursue this career path.”
McDonough’s career path as a professional violinist is multifaceted, as she both teaches and performs in multiple capacities, in addition to writing original music. She has released three singles that are available on several retail and streaming platforms and is currently working on a full-length album. McDonough teaches private lessons at home, at an after-school music program, and also as a substitute teacher for the Hawaii Department of Education. She performs across the state under her stage name Kimberly Hope at places as far-ranging as fashion shows to county fairs to nursing homes. Some of her performances can be seen on her YouTube channel.
There are still moments, however, when even McDonough struggles with self-doubt. “There are times when people tell me that music is not a real career,” she said, adding that “every so often, I have a hard time writing my original music because I don’t think it’s good enough, or that no one will like it.” However, through her experiences performing at events all over Hawaii, teaching students, and writing original music, McDonough remembers the power of music and the reason that she has devoted her life to it. “I have found that my music can really help heal and bring people together, not only in my community, but all over the world,” she said. “Music is a universal language that can non-verbally communicate to people worldwide. It transcends the boundaries and walls between people, and that’s why I find it so beautiful.”
McDonough hopes that in her dual roles as a teacher and a performer, she can serve as an inspiration for others who want to learn an instrument. “I hope to inspire my students to not only learn to play well but do so with passion and heart,” she said. “The biggest impact I hope to have on anyone is to inspire them to follow their passion, keep practicing, and never give up!”