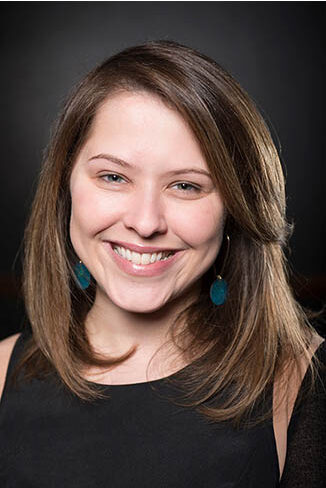 Though she majored in sociology, theatre and the arts play a major role in the story of Maggie Popadiak ’05. She learned about The College of Wooster through a college counseling program that had just started at the time she was a senior in high school through the Albany Park Theatre Project in the Chicago area. APTP, where today Popadiak serves as associate director and director of school-based programs, connects students from the local first-generation immigrant community with the opportunity to tell their stories and to educational opportunities that they otherwise might not consider.
The daughter of a single mother who was then an undocumented immigrant from Poland, Popadiak knew that she wanted to be challenged and have a successful future but still feared failing as a first-generation college student. At Wooster, she “fell in love with a place that was interested in getting to know who I was,” she said. “I had professors from really early on who could sense that fear and invested in me.”
Her freshman year, Shirley Huston-Findley, professor of theatre and dance and also a first-generation college graduate, took the time to tutor Popadiak weekly, one-on-one to improve her writing. “It was a direct response to something she saw in me that I needed,” she said. “The kind of interest that she took in me is the kind I take in my work with students.”
As an ethnographer and an artist, Popadiak works with APTP to “use theatre as a means to change the world, to expose audiences to stories that they might not usually have access to,” she explained. Through immersive theatre, audiences of 21 people at a time see the experiences of people in the community such as families being separated because of ICE, bullying, racism, poverty, and other challenges and struggles.
“By sharing those stories with people, they become more aware of the issues,” said Popadiak. “It’s an exciting way of using theatre to tell stories of things that are happening every day and to propel people forward to do something about the state of the world today.”
Making trips to Wooster every two years with APTP’s counseling program, Popadiak enjoys sharing her Wooster story with them and watching them see college as a possibility for themselves as they learn from current students at Wooster who also connected to the College through APTP. Popadiak found as a sociology major, she could apply her own experiences growing up in a low-income community in Chicago. “Wooster molded me into a person who thinks critically about the world and understands that world from a sociological perspective,” she said, a lens she uses in her work today.