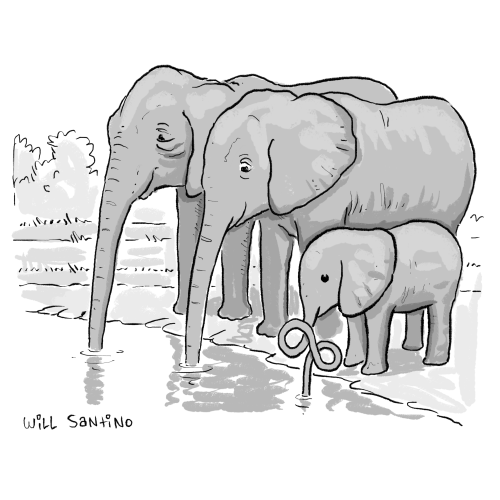 Will Santino ’11 has loved drawing ever since he was a kid, but it always competed with his desire to write fiction. Santino intended to pursue creative writing when he started at The College of Wooster, but a drawing class his sophomore year reconnected him with his love for art. He quickly declared an art major and has since been building a career as a cartoonist and illustrator.

Santino said that working on his Independent Study project, a non-traditional graphic novel about science, religion, and make-believe, confirmed that he wanted to put art and storytelling at the center of his life. “It showed me how much I genuinely cared about creating and illustrating stories, and it was something that I was willing to work really hard at,” Santino said. He also found an inspiring creative community among the other Wooster art majors. “Being able to go to Ebert and have my own studio and have the other people who were also majoring in art that year working on their big projects was a really fertile atmosphere for ideas and for creativity,” he said. 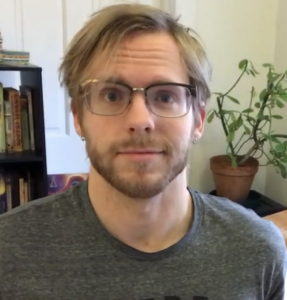 Santino’s I.S. advisor Walter Zurko, the recently retired Eugene and Charlene Derge Sussel Endowed Professor in Art and Art History, provided helpful guidance during the process. “His enthusiasm and criticism was very, very important,” Santino said. Zurko recommended artists, authors, and illustrators that profoundly shaped Santino’s work ethic. Santino particularly remembers checking out a book that Zurko recommended by the artist and author Shaun Tan at the College’s library. “It was a really eye-opening moment of realizing this is what I want to do, this is amazing, but it’s going to take serious dedication,” he said.

After college, Santino got a job at a studio that makes animated whiteboard videos for companies. He was working 40 hours a week making drawings for other people, which left him little time and energy for his own work. Santino managed to create and self-publish a children’s book in the hours after work and on the weekends, but the process ultimately left him feeling burned out. “It was not sustainable in the long run and I knew that my path in life was really pursuing the work that I wanted to make and the stories that I wanted to tell,” Santino said. In order to devote more time to his art, Santino enrolled in the University of Wisconsin-Madison’s art program. 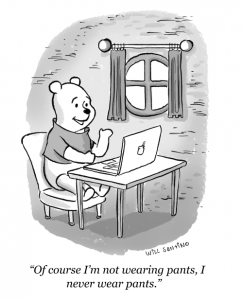 Cartoon by Will Santino ’11

During graduate school, Santino submitted his first cartoon to The New Yorker on a whim. Rather than giving up when it was rejected, Santino began submitting the magazine’s limit of 10 cartoons a month. Santino endured years of rejections until last September, when the cartoon editor reached out to say that the magazine was interested in his work and invited him to begin submitting five to 10 cartoons a week. “There were times when I hadn’t gotten anything for two years other than the same two sentences of rejection,” Santino remembered, saying that he thought “maybe this isn’t going to happen. And then it did.” Santino recently sold three of his cartoons to The New Yorker. One has been published on the magazine’s website and the other two will appear in forthcoming print issues. While that has been an exciting achievement, Santino continues to work just as hard on his art. “As an artist—and maybe this is just good advice for life—it is important to focus on the journey or the process rather than the output,” he said.

Santino graduated from UW-Madison in 2018 and recently partnered with the university to create coloring pages for children during the coronavirus pandemic with messages about wearing masks, social distancing, and feeling hopeful. “A lot of my art is whimsical and fun, so the opportunity to make coloring pages for kids about COVID-19 was really appealing to me,” he said. “I can only imagine how hard it is for kids not to be able to see their friends and do normal kid things, so it felt rewarding to be able to make positive and educational content.”

Santino continues to work part-time for the whiteboard studio, but is hoping to one day become a full-time, self-employed artist. Even though he has often had to balance his art with other commitments, Santino is thankful that ever since the Wooster drawing class reignited his love for art, he has been able to dedicate time to his creative work. “I’m very lucky and grateful that I can pursue the stuff that I want to do,” Santino said.