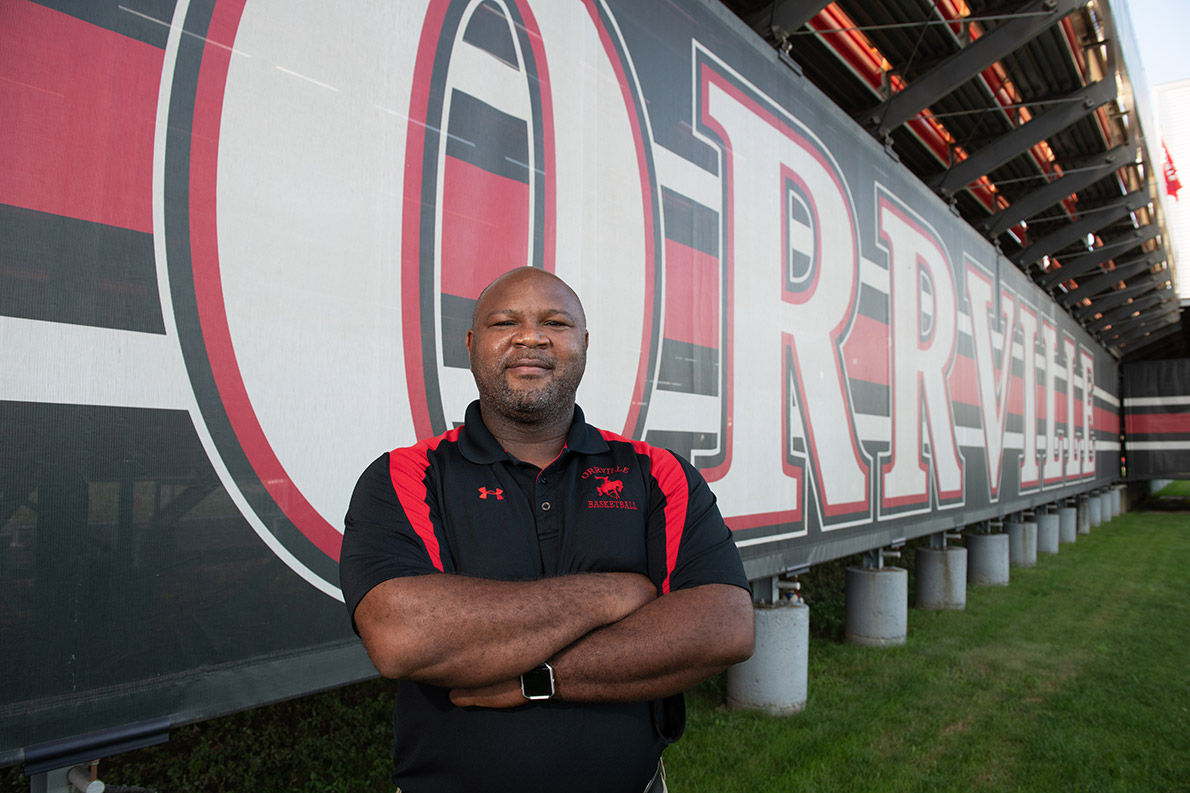 When The College of Wooster accepted him as a high school senior from the neighboring town of Orrville, Ohio, Sly Slaughter ’98 said that the school was taking a gamble. “I wasn’t a 4.0 student in high school. I didn’t have the 28 or 29 on the ACT. I was a kid that Wooster took a shot on,” he said. “When I got there, I struggled early on. I didn’t know if I fit in academically and athletically.” With the support of professors and coaches, however, Slaughter found his place at Wooster. “Once I got through my first semester, I knew that Wooster was where I should be,” Slaughter said, describing the College as the “perfect fit” for him.
Slaughter majored in history and played football at Wooster, ultimately deciding to pursue a career in education. Since graduation, he has worked in Wayne County schools as a world history teacher, football and basketball coach, dean of students, and now as the assistant principal of Orrville Middle School. Slaughter extends the same type of support he received at Wooster to his own students. “I wanted to make sure that I did things right for Wooster and carried that over to my students,” he said.
Charles Kammer, the recently retired James F. Lincoln Professor of Religious Studies, served as a particularly important model to Slaughter for good teaching. “The way that he handled things in the classroom and his demeanor showed that he really cared about his students,” Slaughter said. In the same way, the strong sense of community at Wooster showed Slaughter the importance of having compassion for others, a principle he extends to his own students. “The atmosphere on campus taught me how to be more accepting of everyone, no matter what their sexual orientation or religion was,” he said. “I try to relay that to all of my students as well.”
After completing his degree, Slaughter decided to work in Wayne County to give back to a community that had supported him throughout his entire life. “There were a lot of things that I had to get through while I was growing up,” Slaughter said, but the Orrville community rallied around him. Slaughter’s familiarity with his students’ backgrounds gives him a unique ability to relate to them. “My greatest strength is my interaction with them,” he said. “A lot of that is making relationships with the students and their parents and understanding that you have to handle everyone differently because everyone is going through different things.”
One student he recently mentored was someone who didn’t know whether she would be able to go to college. She met with Slaughter often to discuss her options and ended up going to Wooster, just like him. “Every time I talk to her about how things are going, the first thing she does is smile,” Slaughter said. “The reason I do what I do is because I want to see kids smile when you ask them how they’re doing. That means they’re doing well, and I had a part in doing that.”