Sociology major supports LGBTQ people at the University of Michigan 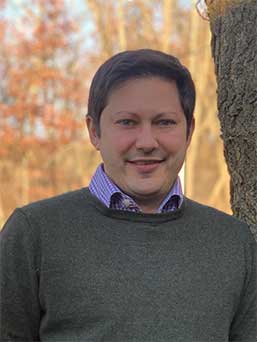 Will Sherry ’05 is the director of the Spectrum Center at the University of Michigan, the oldest gender and sexuality center on a university campus in the country. Sherry supervises the center, which provides trainings, consultations, events, support groups, and mentorship programs, all ultimately with the goal of making every aspect of the university actively welcoming to LGBTQ people. “I think about how much Michigan has to offer and how important it is to make those opportunities available to everyone,” Sherry said, explaining that it takes the specific skills and knowledge that the Spectrum Center offers to do this. “I see the importance of this work because I think people often don’t know information about how this classroom or this program or this school feels for someone that maybe isn’t experiencing it from a majority experience.”
Sherry majored in sociology at Wooster and studied gender and emotional labor in waitressing for his Independent Study project, a topic born out of his gender and economic development study abroad program in Jamaica. After graduating, he attended the University of Michigan School of Social Work which Wooster prepared him well for. “I felt very prepared academically for grad school,” Sherry said. “Wooster does a really good job of that.”
It was in graduate school that Sherry began to do work specifically related to LGBTQ people. He volunteered at the Spectrum Center, where he has since spent most of his career. While Sherry had not been involved specifically in this type of work at Wooster, he sees many ways that his undergraduate experience prepared him for what he does today. Working on I.S. taught him how to be constantly open to feedback, a crucial mindset to have in his position. “The Independent Study process for me was a huge exercise in getting comfortable with feedback that’s constructive and leads to something better,” Sherry explained. “A lot of diversity, equity, and inclusion work is about understanding how to hear other perspectives and knowing that you have to expand your understanding.”
Sherry said that professors also fostered this type of honest and open environment in the small classes that he thrived in at the College. “Faculty did a really good job of creating space in classrooms for discussion, critical thinking, and respectful dialogue,” he said.
Currently, Sherry said that the Spectrum Center is working to engage in deeper, more long-lasting partnerships across the university. Rather than simply doing one-off trainings in departments, for example, Sherry said the center is encouraging all members of the university to “really think about what your department needs to understand about gender and sexuality to do your work better on behalf of your constituents. We’re turning a corner to engaging in some deeper work and deeper partnerships and that’s been going really well.” While Sherry loves his current position, he hopes that one day he can have the chance to work at a small school like Wooster, because of how much he valued the sense of community there. “I love working at a really large institution, but I also think one day I would love to give back to and engage with a school like a Wooster,” he said.