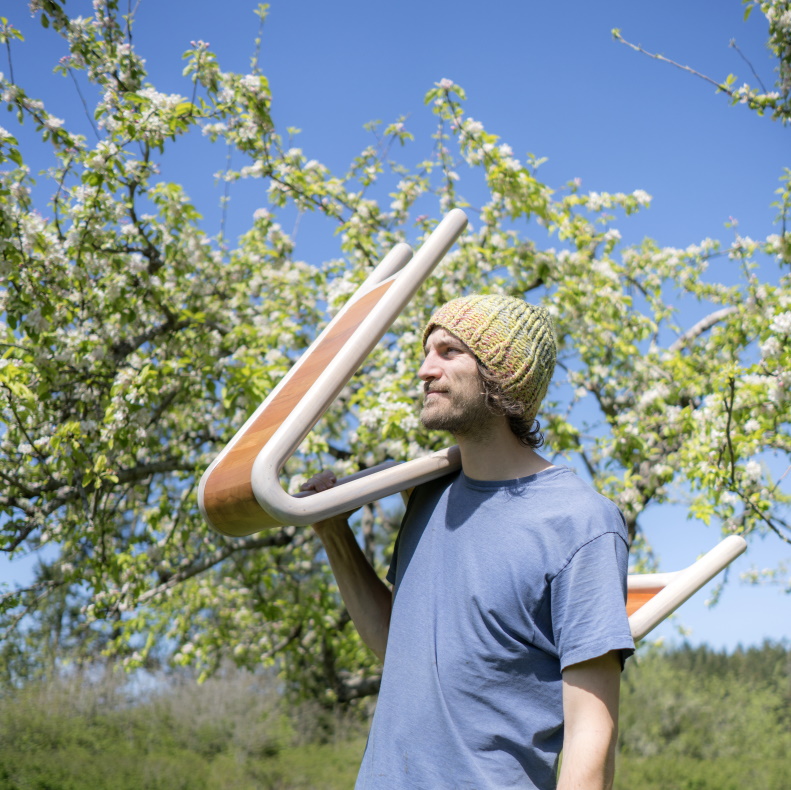 While Kevin Reiswig ’10 always enjoyed his art classes as a student at The College of Wooster, he never considered it as an occupation until the summer between his sophomore and junior year. During that time, he worked as a research assistant for his advisor, Walter Zurko, professor emeritus of art. “The short apprenticeship was extremely educational and allowed me to hone my skills,” Reiswig said. “Walter was an example for me of someone who had made a career using his mind, his hands, and his heart in equal measure.”
Reiswig is a furniture maker and wood sculptor working out of his fully equipped home studio in Port Townsend, Washington. He credits the internship he had after graduating for building his confidence. “After graduation, I was hired as a summer workshop intern at Anderson Ranch Arts Center in Colorado,” Reiswig said. “The summer was spent assisting in multiple workshops taught by very talented artists from all over the country, which was an extreme boost for my development as an artist.” Having grown up in rural Ohio, Reiswig decided to experience life in a big city by moving to Chicago and spent time assisting established artists, namely John Preus, a fellow woodworker, and Theaster Gates, whose career was rapidly ascending at the time. Reiswig aided in a variety of projects, including custom wood furniture and interiors. “Working in Gates’ studio was very engaging, but after five years I decided to move on to make my own work for a living,” Reiswig said.
In addition to wood sculpting, the Wooster graduate is a faculty instructor at the Port Townsend School of Woodworking. “It eventually became clear to me that teaching would be one of the best ways for me to become a better and more knowledgeable woodworker, and a better communicator when it comes to explaining what my work is about and what it takes to create any given piece,” Reiswig said. “Teaching has also been a good way for me to promote other things that I care about, such as respect for one another and our environment.”
Reiswig credited the College’s emphasis on writing—whether for class or I.S.—for helping him become a better communicator as an artist and teacher. “I think Wooster’s general focus on writing has benefitted me way more than I would ever have realized at the time,” he admitted. “Now I am a confident writer, and that has played a big part in any amount of success I’ve had post-graduation.”
Reiswig offered advice for current students considering a career in art. “Working as an artist may require also working some jobs that aren’t so fun,” he said, “but if you set goals for yourself, stay determined, and continue to step outside of your comfort zone, in time, you will come closer to the place you want to be.”
Kevin Reiswig ’10 holding a piece of furniture he crafted