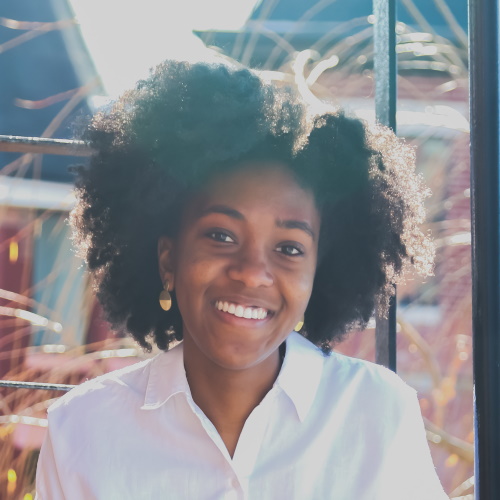 As a communications and operations associate at The Loveland Group, Monét Davis ’19 helps carry out the work of the organization’s many initiatives, including Elizabeth’s Bookshop & Writing Centre, a literary center for marginalized voices; an online learning community; and the consultancy, speaking, and lecturing work of the organization’s founder Rachel Cargle, an activist, consultant, and writer who has been called a “philanthropic innovator.” This family of ventures is invested in supporting the culture of Queer, Trans, and Black Indigenous People of Color, and promoting opportunity, healing, and lifelong learning.

Davis started as a fellow at Loveland and worked on educational materials. Now she oversees and assists with day-to-day planning for the organization. It’s fulfilling work that she enjoys, and it builds on a lot of the experiences, classes, and conversations she had at The College of Wooster. At one point, before graduation, Davis worried she might not be able to so freely explore new interests after college. To her relief, that hasn’t been the case as she has found like-minded colleagues and peers in a city she loves: Washington, D.C.

“I came into Wooster very curious. Throughout my four years, my curiosity only grew,” Davis said. “I was really worried that once I graduated my opportunities to continue to further feed my curiosity in a fulfilling way wouldn’t be possible.”

One of Davis’ favorite initiatives at The Loveland Group is The Great Unlearn, which provides online educational materials to anyone who wants to “unlearn” the views of racism and oppression taught in the United States. As a fellow at The Loveland Group before she became an associate, Davis worked on a 30-day syllabus on social justice issues, which included reflection questions and recommended reading. Helping others learn and build critical-thinking skills is something Davis wants to continue.

The work she is doing now isn’t quite what Davis envisioned when she arrived as a first-year student at Wooster, eager to take classes in international relations with aspirations to work at the United Nations. Realizing she wanted to focus more on people than the policy discussions in international relations, Davis pivoted to anthropology and then to sociology. She cares deeply about bringing attention to those who don’t benefit from the policies and innovations that are meant to promote equality and a more equitable society.

College internships at the American Academy of Pediatrics, the U.S. Senate, and deep research into the impact of communities displaced by gentrification all got Davis closer to who she is now. The experiences helped her better understand the gravity of some difficult issues in society, like economic disparity in cities and the crisis of Black maternal health. Davis’ long-term plan had been to go to law school, but for now she says she’s content where she is, though she’s considering a graduate degree in business that will allow her to “tackle social justice issues through a business operations lens.”

Published in the Wooster Magazine in Spring 2021