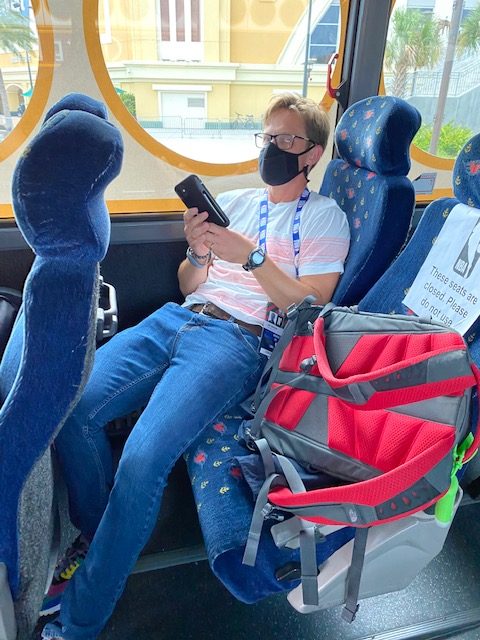 Aug. 26, 2020 belongs on the list monumental sports moments in history, and a College of Wooster alumnus was in the NBA Bubble to document it all. The Milwaukee Bucks refused to take the court prior to game five of its first-round NBA Playoff series against the Orlando Magic in response to the police shooting of Jacob Blake in Wisconsin. Shortly after, the NBA announced all playoff games were postponed for the day, and by day’s end, the future of the NBA season was in doubt following a players-only meeting.
Joe Vardon ’02, a communication studies alumnus and senior NBA writer for The Athletic, was nearing the end of his 53 days in the NBA Bubble. He originally planned to catch up on sleep before covering the Los Angeles Lakers and Portland Trail Blazers game later that day, but as fate would have it, he ultimately decided to “check (the Bucks) out before they close out the series” since he hadn’t seen them play lately.
“At the beginning, there were only two of us (reporters at the arena),” shared Vardon. “It was me, and my friend, Malika Andrews from ESPN. At the same time, we both looked up and noticed there were 16 minutes left on the (pre-game) clock and the Bucks weren’t out yet. She got a call and went one way. By now, given all the things that had been going on, and the whispers going on about this with the other teams, I realized that there could be a problem. I walked around the other way, past the visitor’s locker rooms, down past the media rooms, and no one stopped me. Sure enough, she and I were both standing right outside the (Bucks) locker room as this whole thing happened. We were simultaneously tweeting and reporting; our links were starting to generate. Within an hour (all reporters in the bubble) were there, but it was just us two to start.”
Initial thoughts that went through Vardon’s mind included “a sense that you have that kind of seat for history,” and professionally, he geared up for “the questions I have to ask,” all while actively working contacts within the Bucks’ organization to find out if the team was planning to come out to make a statement, plus contacts on teams scheduled to play later that day to get the inside scoop on potential decisions from those teams.
“As things started to slow down from the initial rush of reporting, and there was still no movement outside the locker room, I had a chance to reflect and start to think about this as something that’s never happened before in the league and I was there for it,” summed up Vardon. “There was a time then where the Bucks’ general manager came out and he saw us, so he came over. He wanted to say something brief without taking questions. Of course, there were some things that had to be asked, so I asked him a couple of things.”
During the near-three hours leading up to the Bucks’ statement, “I prepared myself to be able to shout a question,” he said. “I knew as a hard news journalist that I would have to ask a question, even though we were told not to do that,” said Vardon, who credits Wooster’s public speaking course as helping prepare him for that moment. “I knew that everybody would be quiet and everybody would hear what I said.”
After wrapping up a write-through with a totally different story featuring more reporting from Vardon from the scene, plus additional reporting from colleagues centering around the league-wide players-only meeting, Vardon walked around Coronado Springs. He was “shocked at how festive (the atmosphere) was,” given all that had transpired that day, including LeBron James and the Lakers leaving the meeting and having unclear intentions if they were going to continue to play.
Later in the week, Vardon scored an exclusive one-on-one interview with James, who he covered regularly as Cleveland.com’s “LeBron James reporter” during the NBA superstar’s second stint playing for the Cleveland Cavaliers, and who Vardon’s maintained a professional relationship with to this day.
“LeBron comes out after playing the Blazers, and there’s no one there, no one to shoo me away,” explained Vardon. “He was going to wait for Anthony Davis. He saw me, and I started to approach him. He knew this was kind of his opportunity to get this out there. Not only did he agree to it, but he kind of brought me over with him. He was telling me, ‘Yeah, I’m going to give this to you.’ He was really forthright and really opened up that night about how close he was to going home and why, and just sort of what the days and hours meant to him as this was unfolding.”
After the interview, Vardon’s rhetoric classes at Wooster, especially those with Denise Bostdorff, professor of communication studies, prepared the alumnus for his reporting on the interview. Lessons learned in the classroom gave Vardon the tools to “try to interpret some of the meaning,” a task Wooster students are challenged to do regularly throughout their studies.
Even prior to the historical events in late August, Vardon can make a strong case for being “Mr. Popular” as far as NBA coverage is concerned. Just being in the NBA Bubble was historic itself, and as one of approximately a dozen reporters on site at the onset of the season’s restart, there was a high demand for content centered on Vardon’s personal experiences. When looking back at the Milwaukee Bucks’ decision and ensuing content, “you just know that this is something that people are going to read and remember you for,” Vardon said. “They’re going to remember whose name is on the story. It really did feel like a seminal moment in my career to be a part of that and see that.” As to the overall NBA Bubble experience? It’s the kind of thing Vardon “can’t even imagine not having been there.”