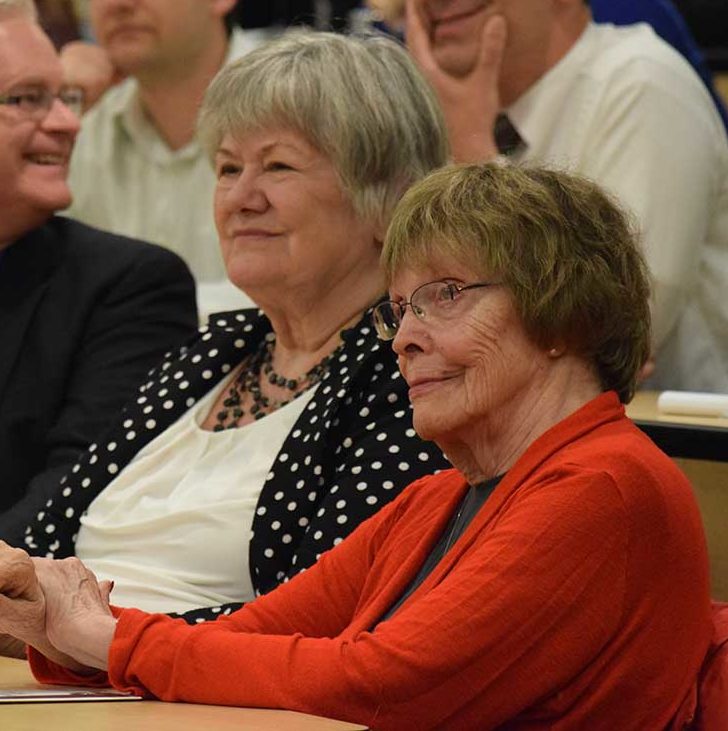 Known at The College of Wooster for the Helen Murray Free Endowed Lecture which brings a renowned chemical scientist to campus each year, Free co-developed the dip-and-read diabetes test, a revolutionary diagnostic test that uses a paper strip to detect glucose in urine. Free, who died on May 1 from complications of a stroke, came to Wooster in 1941 to study to be a Latin or English teacher, but after the start of World War II she took an opportunity to switch her major to chemistry that changed her life.

“I think that was the most terrific thing that ever happened because I certainly wouldn’t have done the things I’ve done in my lifetime,” said Free, in a biography produced by the American Chemical Society. After completing her bachelor’s in chemistry at Wooster in 1945, Free took a position at Miles Laboratories in Elkhart, Indiana. She worked in quality control before joining the biochemistry division focusing on diagnostic testing led by her future husband Alfred Free. Along with Free, she developed a glucose test that would ensure “no one would have to wash out test tubes and mess around with droppers,” she told The New York Times in an interview in 2011. According to the American Chemical Society, the use of color-changing strips that could detect glucose led to a breakthrough and additional dip-and-read tests for proteins and other substances. The technique and further research led to the development of inexpensive tools for the management of diabetes and kidney disease that improved the quality of life for these patients.

It was based on this same idea that her children established the Helen Murray Free Endowment at Wooster. Endowed through the Al and Helen Free Foundation, the fund supports the annual lecture that allows a renowned chemist to interact with chemistry students on a technical level and present an all-college convocation on the contributions of science to the quality of life. A generous donor to the College for more than 39 years and a member of the 1866 Legacy Society, Free attended the lecture herself on multiple occasions and had the opportunity to interact with students. Above Free is pictured with her daughter-in-law Sheryl McClure at the lecture of Madeleine Jacobs, president of Strategic Science and former executive director and chief executive officer of the American Chemical Society who spoke for the event in 2016. In 2015, Free contributed to the Wooster’s Promise Campaign in support of the Chemistry Equipment Fund used for the purchase and maintenance of equipment that benefits chemistry students and faculty in joint classrooms and laboratories. The Free Instrument Room in Ruth W. Williams Hall recognizes her contributions to the campaign. She also supported the renovation of Severance Hall in the 1990s and was recognized by the Alumni Association with a Distinguished Alumni Award in 1980.

Free was passionate about raising awareness around the contributions of chemistry to modern life. The American Chemical Society, an organization that elected her president in 1993 named an award for public outreach in her honor. She and her husband published two books on urinalysis, and she earned her master’s in clinical laboratory management at Central Michigan University in 1978. She developed seven patents for her inventions in diagnostic testing, and published more than 200 scientific papers. She became director of clinical laboratory reagents and later director of marketing services in research at Miles Laboratories before retiring in 1982. She and her husband Al were inducted into the National Inventors Hall of Fame in 2000. In 2009, President Barack Obama awarded her a National Medal of Technology and Innovation, and in 2011, she was inducted into the National Women’s Hall of Fame in Seneca Falls, New York for her role in the development of the dip-and-read test.

Her full obituary, covered in the New York Times, can be found here and more about her work in chemistry can be found in her biography published by the American Chemical Society.