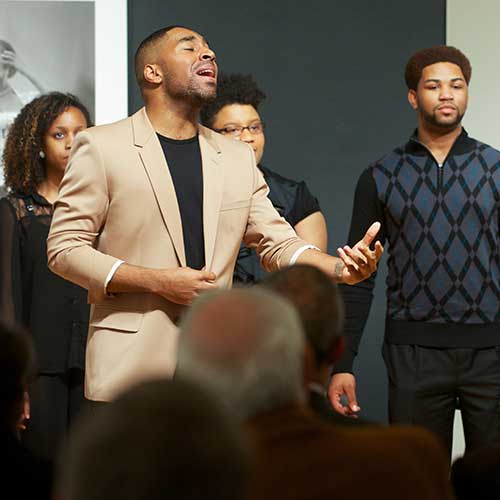 College of Wooster alumnus Darius Scott Dixson ’13, “DIXSON,” as he’s now known as a musical artist, received an Oscar nomination in the Best Original Song category for the music and lyrics of “Be Alive” from the motion picture King Richard, alongside Beyoncé Knowles-Carter. The song plays during the credits for the film that focuses on the story of the father of tennis superstars Venus and Serena Williams with footage of the family.

In an interview with Variety last month, Dixson shared that he drew from his personal experience as he wrote the lyrics, “My father was very similar to Richard Williams—he had a strategy for his kids,” Dixson said in the article. “I didn’t need to see the film to know the story; I lived it myself.” Writing the song before the film that stars Will Smith as Richard Williams was released, after only seeing clips, he also relied on his familiarity with the story of the Williams sisters and their father.

Dixson majored in arts and media management using Wooster’s student-designed major program that allows students to work with their advisors to develop a major theme that fits them. He was also involved in Wooster Chorus and Merry Kuween of Scots, an a cappella group of all-tenor base singers that has performed on campus and locally. Originally from Atlanta, Georgia, Dixson was part of the Posse Program, an ongoing program that brings students to one school as a group through Wooster’s partnership with The Posse Foundation. He worked with advisor Denise Bostdorff, professor of communication studies, to complete an Independent Study that examined how film can be used to instruct independent music artists on branding and promotion, including a short documentary called The Grey Area, a compilation of interviews with independent music artists, music industry executives, music producers, songwriters, and entertainment lawyers sharing his passion for educating independent music artists on the best practices in promotion and branding.

Now a singer, songwriter, and producer, signed by record label Roc Nation, Dixson has collaborated with Chance The Rapper, Vic Mensa, and Pharrell Williams in addition to Beyoncé. In 2016, he joined Williams’ team on NBC’s The Voice, a​nd the Wooster community shared their support. He earned a spot in the top 20 before leaving the show. DIXSON also more recently worked with Justin Bieber on the acoustic version of the hit track, “Holy.” In 2021 he wrote and produced his first album as a solo artist with Roc Nation inspired by his life events releasing singles such as “Summertime.Fin,” “Aura,” and “BIG BRAVE MAN,” a song dedicated to his late father.

Photo: DIXSON sings at a special College event in 2013.