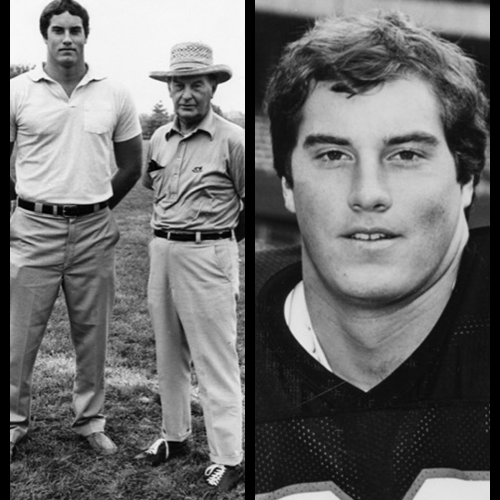 Super Bowl XVI was significant for several reasons. One of those centers around E. Blake Moore Jr., a proud 1980 College of Wooster alumnus, who was an offensive lineman for the Cincinnati Bengals. Moore’s primary on-field role in the Super Bowl came as a wedge blocker, meaning he ran shoulder to shoulder with a teammate to form a high-speed shield for the kickoff returner. He also blocked for the team on field goals and extra-point tries.

Leading up to the Super Bowl, the second-year pro helped Cincinnati post an AFC-leading 12-4 record. In the AFC Championship game, Cincinnati beat the San Diego Chargers 27-7, in a game known as the “Freezer Bowl,” a game to this day Moore “can’t even talk or think about without getting cold.”

“It’s one of those experiences that’s impossible to describe,” shared Moore. “You almost have to be there and live through it. They used a different (temperature) scale back then. They said our game day temperature was minus 59 windchill, so I say minus 59 because that’s what they said back then. We took the field and San Diego never had a chance. They were so overwhelmed by the conditions.”

Even though the Super Bowl was “an unfortunate loss,” per Moore, “it was a great experience to go and play in that game.” Wooster’s star even got some national fame when Nightline came over to ask about what it was like at a table by himself with all the press around during daily team-wide media obligations.

“You get to Super Bowl game day, and it’s an ice storm,” recalled Moore. “It was a challenge getting to the stadium and the game started late. Then, it’s over before you know it. All of a sudden, we’re in the game, we’re behind, halftime, we try to catch up, we almost catch up, we’re at the 1-yard line, we don’t get in after three tries, and it’s over. You just can’t believe it’s over and we lost. We were all stunned.” 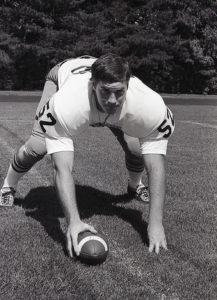 At Wooster, an unparalleled singular determination to be the best enabled the history alumnus to simply outwork the opposition, and the College “gave me the opportunity to play, to get better, and be better,” per Moore. Grueling offseason on-his-own workout regimens were the norm during a time where players who regularly partook in offseason strength and conditioning work – a standard today in college athletics – were few and far between across every level of college football.

Opportunity knocked at the door for the two-time All-American prior to senior year when Ernie Infield, the College’s sports information director at the time, secured a visit to the Cincinnati Bengals due to his work with The Daily Record. That trip put Moore on the radar of NFL scouts. With only 45 players on active rosters and no practice squads at the time, Moore’s abilities as a long snapper gave him a leg up during scouting visits where he was regularly “timed, checked for accuracy, and all of those things.”

“It gets pretty cold up in Wooster in the winter,” Moore reflected. “I had to keep my long snapping skills in shape in the offseason. The hallway in my dorm was exactly the length of a punt snap. I would get either my roommate or some other poor unsuspecting hall mate to stand down at one and, and I would get at the other with a couple of footballs. I practiced long snapping in the hallway, and I’m pretty sure an exit light was a casualty.”

After graduation, Moore was offered un-drafted free agent contracts by the Cincinnati Bengals and Cleveland Browns. He ultimately chose the Bengals due to “an entirely new coaching staff coming in” and everyone having to learn a “whole new offensive system,” per Moore.

“I knew everything was going to change,” Moore explained. “I certainly didn’t have a physical advantage over anyone. I figured I would at least have an intellectual advantage as everyone had to start at the same place and learn a new system and structure from scratch. If anything, my Wooster education and training intellectually would give me an advantage to at least give me a shot. My long snapping capabilities gave me an edge and a tiebreaker over anybody else I was competing with for a position.”

“Football aside, all of the different career positions I’ve held, and the teams I’ve been able to work with on the business side have been phenomenal,” Moore reflected. “I attribute a lot of that to the things I learned at Wooster, how to think and how to work with all kinds of different people. That was a great experience, and I encourage high school students to think of Wooster for that very reason. Wooster gives you all kinds of options when you graduate.”

Above right: Blake Moore’s meeting with Cincinnati Bengals executive Paul Brown prior to his senior year at Wooster put him on the radar of NFL scouts.