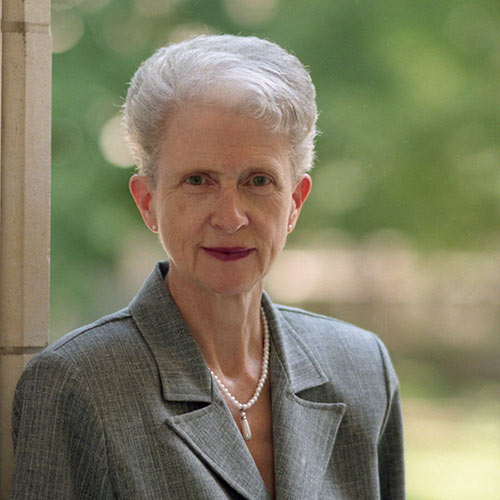 Vivian Holliday, emerita professor of classical studies at The College of Wooster passed away on Dec. 24, 2022, in Wooster, Ohio. Holliday, who began her time at Wooster in 1961, served the College in multiple capacities including as the first woman to serve as dean of faculty in addition to her distinguished career as a classical studies, archaeology, and history professor.

Prior to joining Wooster’s faculty as an instructor in Greek and Latin in 1961, Vivian taught classics at the University of Missouri and at the University of North Carolina, Chapel Hill, where she earned her Ph.D. in Classics. After eight years at Wooster, she was promoted to full professor and a year later, appointed the Aylesworth Professor of Classics and History. She advocated for the founding of the Department of Archaeology at the College and chaired the Department of Classical Studies from 1967 to 1976 and 1987 to 1990. A profile published in Wooster magazine after her retirement in 1999 noted that students remembered Holliday for her fresh and imaginative approach to the teaching of Latin. Students were required to speak Latin in class. She empowered them to use computers in the language lab and further engaged them in language through the translation of inscriptions rather than traditional texts. In one exercise, students were given campus maps and sent on an archaeological dig, armed with hints or clues which would lead them to an inscription Holliday had placed somewhere on the campus. She was guided by the conviction that the study of any language, ancient or modern, is imperative if we are to understand ourselves.

Appointed dean of faculty in 1977, Holliday was highly involved in the reassessment of the course curriculum and the faculty’s eventual adaptation of the semester calendar in 1983-84. She enjoyed her time mentoring faculty, working closely with individual students and with then President Henry Copeland on curriculum and as an advocate for faculty. Emerita Professor of Physics Shila Garg fondly remembers meeting with Holliday when she took on the position of dean of faculty in 2002. “I remember coming out of that meeting feeling respect for her insights and admiration for the calm way in which she approached problems which needed to be addressed,” recalled Garg. “She mentored a lot of younger faculty members and helped them put down stronger roots in the academic, as well as the larger Wooster community.”

Holliday served on the Committee on Conference with Trustees, as co-director of Freshman Colloquium, and as coordinator of the Integrated Freshman Quarter. She developed and led the Wooster-in-Greece Program, and after two terms as Dean of the Faculty, she went on to develop the Luce Leadership Program. Her research on the Roman concept of Virtus and the Greek concept of Arete and their connections to moral issues and theories on leadership became a part of a successful proposal the Henry Luce Foundation in 1984 to fund the interdisciplinary seminar: Leadership: Theory and Practice. She further developed the course to incorporate more readings in the humanities and a competitive field placement program shadowing leaders around the country. Her research on the impact of Arete and Virtus on Greek and Roman society was published in Classical in Modern Narratives of Leadership, a collection of essays published in 2000.

Holliday’s professional activities and responsibilities extended from Wooster to all over the world. The recipient of a Fulbright Award for study in Italy in 1965, she also received a National Endowment for the Humanities summer stipend in 1970 and again in 1992. She served as a member of the Managing and Personnel Committees of the American School of Classical Studies in Athens, an editorial referee for the Classical Journal, and as an evaluator of fellowship proposals for the American Council of Learned Societies. She was coordinator of the Great Lakes Colleges Association Classics Committee and a consultant for the improvement of teaching and Women’s Studies programs for the GLCA. She was visiting administrator in the Soviet Union in June-July of 1985, visiting research professor at Dartmouth College in 1981, and a visiting scholar at the University of North Carolina, Chapel Hill the same year. She was also a member of the Classical Association of the Midwest and South and the Modem Greek Studies Association. At Wooster, she was a member and president of the Faculty Club, advisor to the Classics Honorary Eta Sigma Phi, and advisor to the EKO’s and Eighth Section.

Her publications include the monograph Pompey in Cicero’s “Letters” and Lucan’s “Civil War” and a number of articles on Roman history and modem Greek literature. She gave a variety of public presentations at Wooster and elsewhere, including a 1980 convocation on “College as Idea: Perspectives and Reflections of a Student, Teacher and Administrator,” the Opening Faculty Convocation at Marietta College in 1990 on first year programs, and a series of lectures on leadership in the 1992 Alumni College at Wooster.

Upon her retirement from the College in 1999, The Vivian L. Holliday Prize was established in her honor. The prize is awarded annually to the senior whose work in Independent Study in history, classical studies, or archaeology has been judged most outstanding.

A memorial celebration of her life will take place on Friday, Feb. 24, 2023, 2 p.m. at Westminster Presbyterian Church, in Wooster with Rev. Eniko Ferenczy officiating. A private inurnment will take place at a later date at the convenience of the family in her hometown of Manning, South Carolina. Her obituary, tribute wall, and funeral arrangements can be found here https://www.tributearchive.com/obituaries/26756601/vivian-l-holliday.