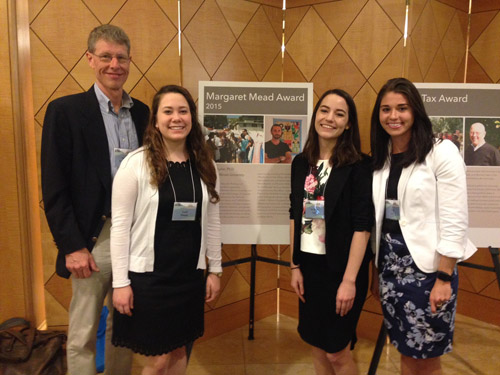 WOOSTER, Ohio — David McConnell, professor of anthropology at The College of Wooster, and three anthropology majors shared their insights about various aspects of Amish culture at the Society for Applied Anthropology annual meeting in Vancouver last week.

McConnell, who was joined at the meeting by seniors Kathryn Foster, Leah Penner, and Paris Nahas, coordinated the session, titled “New Intersections and Border Crossings in Amish Country.” The shift from farming to small businesses and the increased reliance on the market economy is “re-casting the meaning of ‘separation from the world,’” said McConnell. The three student papers in this session dealt with tourism, health care, and those who have left the Amish way of life. The presentations were based on fieldwork in the largest Amish settlement in the world (Holmes County, Ohio) and suggested the need for re-thinking our models of how the Amish negotiate with the outside world while simultaneously trying to maintain cultural boundaries, according to McConnell.
Foster’s presentation, titled “You Can’t Change What You Were”: Liminality and the Process of Role Exit Among Former Amish,” chronicled the reasons behind defection as well as how the 15-percet of Amish who choose not to join the church or who are excommunicated negotiate the transition from Amish to English (non-Amish) life. Her study, based on interviews with former Amish, provides an important contrast to the literature on ex-Amish, which tends to portray young people sneaking out of their homes in the middle of the night as part of a process that is fraught with tension and conflict.  Foster’s study showed more of a spectrum of experiences and concluded: “just as there are many ways of being Amish, there are also many different ways of leaving the Amish.”
Penner spoke about her study on “Amish Birthing Centers: Navigating Modern Medicine and Religious Beliefs,” which investigated the process of childbirth in Amish communities. She examined the recent implementation of birthing centers for Amish patients that seek to provide mothers with advanced healthcare in a context aligned with their religious values. Through interviews with non-Amish midwives and participant observation at a birthing class, Penner analyzed how medical professionals and Amish patients navigate the intersection between modern healthcare and cultural beliefs. She found that the Amish do not always view the authority of the doctor as paramount and that they have resisted the medicalization of childbirth to a large extent, though changes in Amish practice are also evident.
Nahas discussed “The Co-Production of Tourism Among Amish Business Owners: Redefining ‘Separation From the World,’” which probed the exponential growth in Amish-themed tourism that has created new intersections between Amish and non-Amish worlds. In interviews with more than a dozen Amish business owners, Nahas asked how they view tourists and how they use Amish branding in their advertising. She discovered that while business owners recognized some negative effects of tourism, such as congestion, most viewed tourists in very positive terms and found subtle ways to accentuate their Amish identity when marketing their products.
“It’s unusual for undergraduates to present their research at this conference,” noted McConnell, “but Wooster’s Independent Study program prepared Kate, Leah, and Paris extremely well, and they did a great job.”
The students received funding from both the Office of Undergraduate Research and the APEX (Advising, Planning, and Experiential Learning) mini-grant program.

Image: David McConnell, professor of anthropology at The College of Wooster, and seniors (from left) Leah Penner, Kathryn Foster, and Paris Nahas shared their research on various aspects of Amish Culture at the Society for Applied Anthropology annual meeting in Vancouver last week.