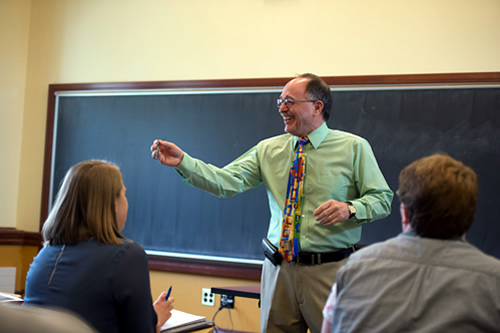 WOOSTER, Ohio ­– John Gabriele never expected to spend nearly half of his life at The College of Wooster, but the colorful professor of Spanish “found a niche” and decided to stay awhile — 30 years to be exact.

Now that part of the journey is coming to an end, and Gabriele and his wife, Carolyn, plan to return home — or at least a place that feels like home — when they head for Chapel Hill, N.C., at the conclusion of the spring semester in May. “I earned my Ph.D. at the University of North Carolina,” he says. “We love the area, especially the weather.”
Among other things, Gabriele plans to golf and cook, travel and dance, and maybe work in the yard or tinker in the garage. “There’s so much I want to do,” he says. “I’m open to new adventures.”
This is not to say that the past three decades have not been an adventure, but in a different sort of way. “Wooster has given me the opportunity to broaden my horizons intellectually by teaching courses outside my field of specialization,” he said. “It really helped me to grow professionally and do some things that I never thought I would do.”
Gabriele is a widely respected scholar on such topics as peninsular Spanish theater and Don Quixote. He has written three monographs, several critical editions of plays, and more than 150 articles for scholarly journals. He also served on five editorial boards. “In addition to the fact that my scholarly activity has given me great pleasure,” he says, “I felt it was my obligation to the profession.”
Gabriele grew up in a bilingual Italian-American household in Connecticut, and even though he thought about becoming a pre-med major in his first year of college, it seemed more likely that his true calling would be in the languages.
Gabriele accepted a position at Wooster in 1986, in part because of its exceptional leave program, which enables faculty members to immerse themselves in intellectual and research opportunities off campus for a semester or an entire year. “My research and publications have been essential to me,” he says.
So has his time in the classroom. “I just got out of a class where everyone was engaged,” he said recently. “All 15 students had something interesting to say. Those are the ‘up’ moments. That’s when you know you’ve had a good day.”
A lot has changed since Gabriele first joined the faculty. “When I came here, the languages were perceived primarily as a requirement, and now many realize the importance of being able to speak another language,” he says. “It has become a door opener for many students.”
One thing that hasn’t changed during Gabriele’s distinguished tenure at Wooster is his energy and enthusiasm, which regularly kindle the interest and curiosity of his students. The classroom has never gotten old for Gabriele, but, he says, he may have gotten old for the classroom.
Gabriele’s students and colleagues, however, would beg to differ. “I certainly do not believe that John is too old for the classroom, but he does wish to pursue other interests, so we must respect that,” says Diane Uber, professor of Spanish language and linguistics and a longtime associate of Gabriele at Wooster. “He has been a tremendous colleague and certainly an asset to The College. I will sorely miss our discussions about language and culture. It just won’t be the same without him.”