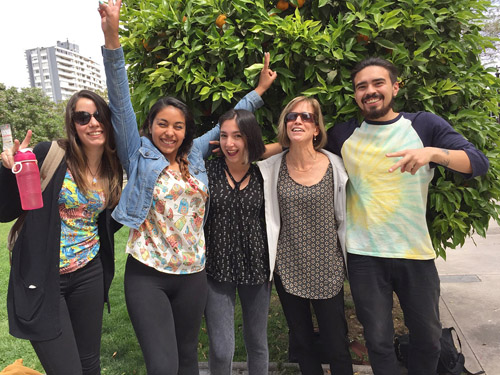 WOOSTER, Ohio – Jennifer Hayward, professor of English, women’s, gender, and sexuality studies, and film studies at The College of Wooster, has received a Fulbright Visiting Scholar grant to Chile from the Fulbright Commission, a program of the U.S. Department of State’s Bureau of Educational and Cultural Affairs.

Hayward is spending the 2016 fall semester researching the 19th century British community in Chile, with particular focus on Scottish travel writers and colonists. She will also lecture at the Universidad Autónoma de Chile, located in the South American nation’s capital of Santiago.
“I feel very, very fortunate to have been awarded a Fulbright grant and very grateful to the College for its generous leave program, which allows me to take advantage of this opportunity” said Hayward, who has taught at Wooster for more than 20 years and was a first-time applicant for the extremely-competitive award.
As a result of the Fulbright experience, Hayward plans to develop a more complex portrait of British imperialism in the 19th century. “Studies of the Empire generally focus on Britain’s formal territories, particularly in Africa and India, but what has been called Britain’s ‘informal empire’ in the Americas played a major role in shaping both Britain and Chile,” she said, also noting that “Chile was often called the England of Latin America, which depending on who you’re talking to can be taken as high praise or as an insult.”
Hayward’s exploration is particularly topical in regards to the changing landscape here at home. “As the U.S. becomes more influenced by Latino cultures, I hope to help us understand that this is not new. Until the 19th century, the Spanish dominated much of the Americas, including part of what is now the United States. My research explores longstanding interconnections between Anglo-U.S., Hispanic, and Latino cultures and connects directly to my teaching, with the goal of strengthening Wooster students’ ability to navigate our own increasingly globalized culture,” she stated.
Of note, Hayward added that the Universidad Autónoma de Chile is very interested in setting up an exchange program so she’s optimistic about the possibility of bringing Chilean students to Wooster in the future. She will also participate in a roundtable on globalization at the Universidad Católica, consult on issues of gender equity, and serve as one of the university’s native speakers of English, providing workshops on the language and culture of Britain and the U.S.
The Fulbright Program, established in 1946, is the U.S. government’s flagship international educational exchange program. Each year, it sends 800 U.S. faculty and professionals abroad to study, teach and conduct research, exchange ideas, and contribute to finding solutions to shared international concerns.