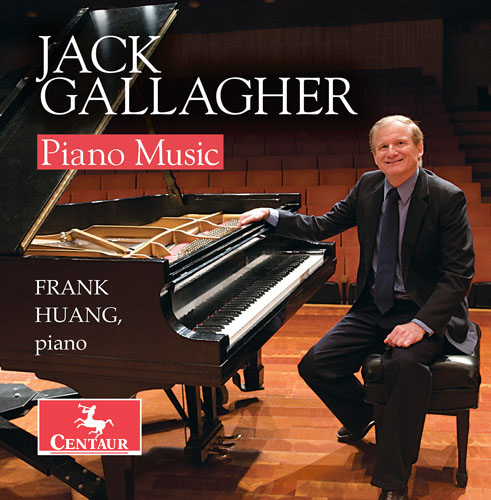 WOOSTER, Ohio – A new album featuring the recorded premieres of collected works for piano composed by Jack Gallagher, the Olive Williams Kettering Professor of Music at The College of Wooster, has just been released on the Centaur Records label. Produced by Gallagher and performed by Frank Huang, an assistant professor at Miami (Ohio) University and former member of Wooster’s adjunct music faculty, it was recorded at WMFT studios in Chicago.
The collection’s nine works, composed across a 40-year span, are “Sonata for Piano,” “Evening Music,” “Sonatina for Piano,” “Nocturne,” “Six Bagatelles,” “Six Pieces for Kelly” (dedicated to his daughter), “Pastorale,” “Malambo Nouveau,” and “Happy Birthday, April” (a present to his wife).
The release, available in hard copy or as a download from Amazon, ArkivMusic, Barnes & Noble, and Naxos Direct, has been acclaimed by numerous print and online reviewers. Alex Baran, an author for The WholeNote, observed “Huang captures the (color) and imagination of Gallagher’s writing whether in works lighthearted or those more cerebral … this recording is a perfect match between composer and performer.”
Additionally, Steven Ritter of Audiophile Audition found “Malambo Nouveau” to be an “encore work of spectacular provenance” and that “one can only hope fledgling composition students are considering Wooster, home of Gallagher’s professorship, as a desired destination for study;” Colin Anderson of ClassicalSource.com noted that Gallagher “has the knack of communicating without making it obvious, drawing the listener into a lively and warm discourse;” and Ronald E. Grames of Fanfare said that “each (work) is a gem, perfectly polished, and wrought with such skill that the finished product seems almost inevitable.”
Of note, the album has been selected by KDFC in San Francisco as “Download of the Week” for March 21 and it was selected a “Top Five Classical Albums” by CFBX in British Columbia, Canada.
The recipient of a 2016 Ohio Arts Council Individual Excellence Award for composition and a member of Wooster’s faculty since 1977, Gallagher has composed nearly 50 works for orchestra, chorus, symphonic band, chamber, ensembles, and solo instruments. This past semester, his “Vivat crescat floreat,” commissioned for The College’s 150th anniversary celebration and inauguration of President Sarah Bolton, was premiered by the Wooster Chorus.
Gallagher’s compositions have been included on 18 published albums and his works have been performed or recorded by the London Symphony Orchestra, Buffalo Philharmonic Orchestra, Cleveland Chamber Symphony, Polish Radio Symphony Orchestra of Krakow, South African National Youth Orchestra, U.S. Air Force Band of Flight, and many others. His “Berceuse” has been broadcast more than 170 times by Colorado Public Radio and more than 50 times over Radio Stephansdom Klassiksender in Vienna, Austria, and as a producer, his recording for TNC Records of Messiaen’s “Oiseaux exotiques” with pianist Angelin Chang, conductor John McLaughlin Williams, and the Cleveland Chamber Symphony, won a 2006 Grammy Award in the classical category, “Best Instrumental Soloist Performance with Orchestra.”