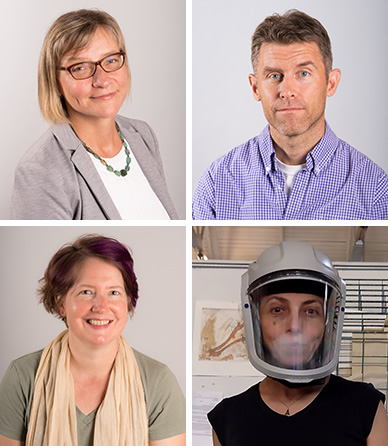 WOOSTER – Four faculty members at The College of Wooster were awarded promotion to full professor – Mareike Herrmann in the department of German and Russian studies, Susan Lehman in the department of physics, Richard Lehtinen in the department of biology, and Marina Mangubi in the department of art and art history – during the June board of trustees meeting.
Herrmann began her career at Wooster in 2001 and has taught courses in German language and culture, as well as film studies. Her primary areas of interest are 20th– and 21st– century German literature, film, women’s, gender, and sexuality studies, and environmental humanities. Her current research involves the intersections of space, mobility, and gender in German film since 2000. A native of northern Germany, she was a student and language assistant at Kenyon College and studied German and English at the Christian-Albrechts-Universität in Kiel, Germany. She earned her doctorate from the University of Massachusetts Amherst.
Lehman, who came to Wooster in 2003, teaches all areas of physics. Her current research is in granular material, investigating how avalanches on a three-dimensional bead pile vary in size and frequency. She also has research interests in optoelectronics and nanotechnology. Lehman received her Ph.D. from the University of North Carolina at Chapel Hill and did post-doctoral research at the National Institute of Standards and Technology in Boulder, Colo.
Lehtinen also joined the Wooster faculty in 2003 and teaches biology and environmental studies courses. His current research involves studying the ecology, evolution, and conservation of amphibians. Some of his projects are in the local area, but many are carried out in the tropics (Costa Rica, Madagascar, Taiwan, and Trinidad and Tobago). Lehtinen earned his Ph.D. from the University of Michigan.
Mangubi has been teaching at Wooster since 2000 and is a painter, printmaker, and installation artist. Her current project, titled Painting Biathlon, combines visual and performance art. It is inspired by modern biathlon, an Olympic sport with military roots, which pairs Nordic skiing and marksmanship. Her work has been exhibited in the U.S. and internationally, including Germany, Russia, Japan, Malaysia, Belarus, Uzbekistan, and Albania, and is in permanent collections in museums in the U.S. and Malaysia. Mangubi received her M.F.A. from the University of Michigan.
The College of Wooster is America’s premier college for mentored undergraduate research. Wooster offers an excellent, comprehensive liberal arts education, culminating in a rigorous senior project, in which each student works one-on-one with a faculty mentor to conceive, organize and complete a significant research project on a topic of the student’s own choosing. Through this distinctive program, every Wooster student develops abilities valued by employers and graduate schools alike: independent judgment, analytical ability, creativity, project-management and time-management skills, and strong written and oral communication skills. Founded in 1866, the college enrolls approximately 2,000 students.