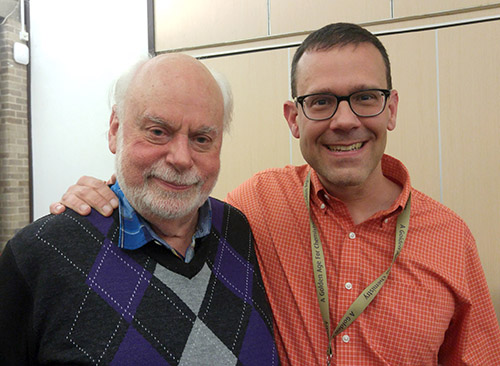 WOOSTER, Ohio – One faculty member of The College of Wooster is feeling particularly invigorated for classes to resume soon. Having spent a few days this summer at “A Golden Age for Chemistry” – a celebration for 2016 Nobel Prize in Chemistry winner Sir J. Fraser Stoddart – Paul Bonvallet eagerly awaits to share some of the new knowledge he picked up at the impressive research symposium.

“It was 10 hours a day of non-stop science, but it was a ton of fun,” said Bonvallet, an associate professor of chemistry at Wooster and formerly a research advisee of the internationally-renowned Stoddart while serving a postdoctoral fellow at UCLA with the California NanoSystems Institute (2002-04). “I was scribbling furiously during the presentations. I was thinking about my own science and … what if I took some of the projects I’m working on and applied some ‘Stoddart chemistry’ to explore new directions.”

The invitation-only event, held at the University of Nottingham in central England, was planned years in advance and intended as a simple gathering to honor Stoddart’s 50 years of independent science research, but the prestige amped up when he was named a Nobel Laureate last October. The Royal Swedish Academy of Sciences awarded Stoddart “for the design and synthesis of molecular machines.”
The Nobel Prize in Chemistry, widely regarded as the most prestigious award in the field, is similar to a lifetime achievement award, or “usually for the totality of the research” as Bonvallet puts it, rather than one accomplishment. So, in a way, Bonvallet, and the 80 or so select scientists who came to the celebration, played a role in Stoddart’s honor.
Even after the life-changing announcement in October, the down-to-earth scientist and current director of the Center for the Chemistry of Integrated Systems at Northwestern University did not want the focus of the symposium altered. Each of his invited guests gave a 15-minute presentation on their current research throughout the four-day event.
Bonvallet deliberately chose a different route for his. Making it Wooster-centric, of course, he described his studies on swellable organically modified silica at ABS Materials, a local company founded in part by fellow Wooster chemistry professor Paul Edmiston. “I talked about what we call ‘swellable glass’ that I worked on with Paul during my year of sabbatical … making materials that swell, don’t mix with water, but absorb organics and can be used for environmental remediation and personal care products. So, I talked about the chemistry from the standpoint of fundamental structure,” he explained.
“I wanted (my presentation) to be different from the others and that came through really clearly,” added Bonvallet. “People said that’s a really interesting material. They said ‘Oh, I used to do chemistry kind of like that, but I didn’t realize you could make something that swells … or absorbs materials. I didn’t realize it had that application.’”
While Bonvallet’s presentation went over well, he is equally excited about what he’s brought back to Wooster. “I had a lot of new ideas come out of that conference … ideas to bring to senior I.S. (Independent Study) and ongoing collaborations with the department of physics.”