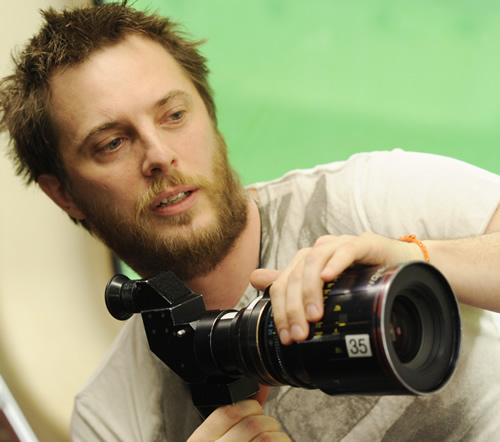 More than 100 million people have played the games that make up Blizzard Entertainment’s World of Warcraft universe since the first one was released in 1994. And judging from the worldwide box office of $433 million – including more than $220 million in China alone – a good portion of them rushed out to see the long-awaited big-screen adaptation directed by Duncan Jones ’95 when it was released in 2016.
As a longtime Warcraft player himself – going back to his days as a student at Wooster – Jones had a very clear vision of the world he wanted to bring to life on screen. “After ‘The Fellowship of the Ring,’” he told TechCrunch, “the films that followed it, instead of having their own unique aesthetic, they all wanted to be ‘Lord of the Rings’ as opposed to learning from ‘Lord of the Rings.’ I wanted to break with the genre a bit, give the palette a little bit more vibrancy and saturation.”
“Warcraft” was Jones’ third feature film, following the critically acclaimed “Moon” and “Source Code.” The Village Voice said “Moon” “marked him as a major new talent” and The New York Times called “Source Code” “a science-fiction thriller with a contemporary twist,” while in the U.K., The Guardian hailed it as “a superb follow-up…terrifically exciting and hugely enjoyable.”
Jones’ first foray into filmmaking came on a decidedly more modest scale: a few short films, shot with his dad’s help, “when I must have been six or seven years old. It was pretty much my favorite father/son hobby, and made use of an 8mm film camera capable of shooting one-stop animation… using Star Wars toys and Smurfs.”
Jones moved around a lot as a child, living in England, Switzerland, Japan, and Australia, before landing at an austere, military-style boarding school in Scotland at age 12 (and from which he was asked to depart at 18, after falling asleep in his English A-level exam). He cheerfully admits that he was a “massively geeky” and “painfully shy” boy.
At the urging of his old headmaster, he took the SAT and began looking at U.S. colleges. In the course of two weeks visiting campuses in New England and the Midwest, he discovered Wooster and it immediately felt “comfortable…multicultural and multinational.”
“Wooster hit me at just the right time in my life,” he says. “I was just starting to get excited about what I could do with my life. I took creative writing and art classes, and tried to spread out as much as possible…One of the wonderful things about Wooster was it gave us all a sense of empowerment…We wanted to make a difference and do things that people would notice.”
While Jones did no filmmaking at Wooster, he does trace some of the themes he explored in Moon back to his Independent Study project, “How to Kill Your Computer Friend: An Investigation of the Mind/Body Problem and How It Relates to the Hypothetical Creation of a Thinking Machine.”  And it’s easy to see why the “Source Code” script appealed strongly to this philosophy major. In the Times’ review, Manohla Dargis wrote that the Jake Gyllenhaal character “doesn’t just jump through action-flick hoops, he also confronts some Big Questions — Are we alone? Are we free? Do we have free will?”
After graduating from Wooster, Jones went to the London Film School. He worked as a camera operator for director Tony Scott, directed music videos and commercials in the U.K., and produced several short films.
When he won a BAFTA — a British Academy of Film and Television Arts award — in 2010 for “Moon,” an emotional Duncan Jones told the audience, “It’s taken me an awful long time to know what I wanted to do with my life and finally I think I’ve found what I love doing.”