Lehtinen Names One of Latest Frog Species Discoveries After Wooster 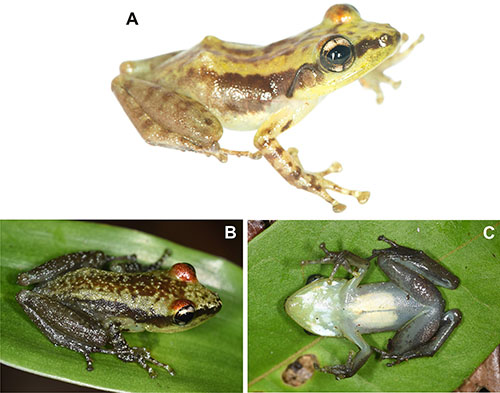 WOOSTER, Ohio – Small with a specialized niche. Sound familiar? That’s how Rick Lehtinen describes one of his latest discoveries – a frog species in northern Madagascar – and it could also be applied to The College of Wooster, where he has served as a faculty member going on 16 years.

Maybe that’s why, on a subconscious level anyway, Lehtinen decided to name this particular new species after the place he has taught, researched, and thrived at. In actuality, the scientific name Guibemantis woosteri was given because he wanted to “show (his) appreciation and love for the school and dedicate it to the College and its faculty, staff, students, and alumni in celebration of 150 years of educational excellence.”
Though, Wooster’s sesquicentennial celebration took place in the fall of 2016, Lehtinen’s discovery just became officially published in the European Journal of Taxonomy this July. In it, he is the lead author of finding two new species – Guibemantis albomaculatus is the other – both found in the leafy pandanus trees that fill the rain forests of Madagascar.
Unbeknownst to him at the time, Lehtinen set the stage for these discoveries by spending 11 months (over a period from 1999-2002) in Madagascar while working towards a Ph.D. at the University of Michigan. Fascinated by a tropical world that had been not been very well explored, he began studying the hundreds of frog species there and it has “kind of snowballed since then” into one of his primary research areas.
The discovery of a new species is a lengthy, and sometimes painstakingly slow, process. Lehtinen, frequently hunched over a microscope, took measurements of the tiny frogs’ body parts, both in Wooster (after borrowing from museum collections), and on research leaves, and the DNA began to reveal possible new species. Further collaboration with fellow experts Frank Glaw and Miguel Vences confirmed it.
As for G. woosteri, the frog is slightly bigger than one’s thumbnail and “could comfortably sit on a quarter,” according to Lehtinen. It has “light-colored dorsolateral stripes and small white spots, but differs by having strongly banded forelimbs and a reddish coloration around the eye orbits,” and what truly sets it apart from other species is its habitat, the “microaquatic environments” of pandanus leaves, as opposed to breeding and living in ponds or other water bodies like most frogs.
“They’re a little bit unusual. They don’t do the normal frog thing. They break the mold,” said Lehtinen, who has now been formally credited with six discoveries of new species.
And, it is likely just a matter of time before that list grows. There are another 10 species within this group that have yet to be described, and for Lehtinen, it is an honor and a passion to be part of that process. “Some people think ‘this is the 21st century, we know everything out there,’ but that’s really not true,” he explained. “This, and many other projects ongoing … keep me passionate about being here. You are contributing to the world’s knowledge, which is an important source of motivation.”

Turn an interest in international service, economic development, NGOs and INGOs into a career