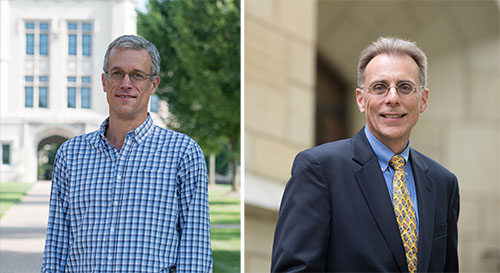 WOOSTER, Ohio – Two faculty members at The College of Wooster were awarded promotion to full professor – Harry Gamble in the department of French and Francophone studies and Henry Kreuzman in the department of philosophy – as announced at a recent board of trustees meeting.

Gamble began his career at Wooster in 2002 and has taught courses that explore the diversity of the French-speaking world, in addition to French language courses. His research focuses on the history of France’s colonial empire, as well as postcolonial relations between France and its former colonies. His recently published book, “Contesting French West Africa: Battles over Schools and the Colonial Order, 1900-1950” examines the shifting and contentious development of a vast colonial federation. He devotes particular attention to colonial schools, contending that although they were designed to help consolidate French rule, they repeatedly became important flashpoints in broader struggles over the colonial order and the future of French West Africa. Gamble received his B.A. from Wake Forest University and M.A and Ph.D. from NYU.

Kreuzman, who came to Wooster in 1990, has taught courses in philosophy and served as dean for curriculum and academic engagement for eight years before taking a leave to serve as interim provost at American University Paris this past academic year. He has also served as chair of Wooster’s pre-law advising program. He has expertise in the philosophy of science, epistemology, and philosophy of law, and his current research focuses upon the history and philosophy of 18th century medicine and childbed fever. Kreuzman received his B.S. from Xavier University and M.A. and Ph.D. from Notre Dame.

The College of Wooster is America’s premier college for mentored undergraduate research. Wooster offers an excellent, comprehensive liberal arts education, culminating in a rigorous senior project, in which each student works one-on-one with a faculty mentor to conceive, organize and complete a significant research project on a topic of the student’s own choosing. Through this distinctive program, every Wooster student develops abilities valued by employers and graduate schools alike: independent judgment, analytical ability, creativity, project-management and time-management skills, and strong written and oral communication skills. Founded in 1866, the college enrolls approximately 2,000 students.