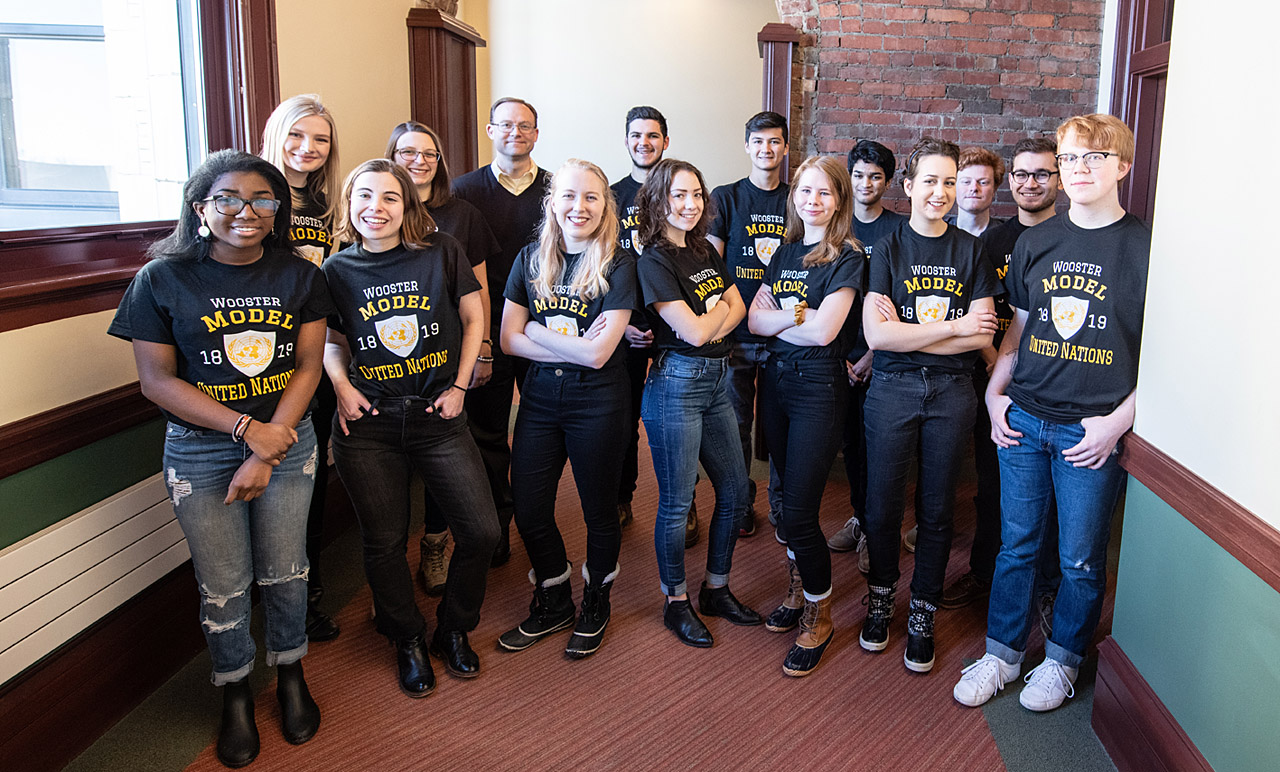 WOOSTER, Ohio – The highest honor – an outstanding delegation award – bestowed at the American Model United Nations (AMUN) International Conference went to The College of Wooster’s team this year. In attendance at the 29th annual event, recently held in Chicago over four days, were 130 teams and only five were designated as outstanding delegations, given to those that excelled in all areas of Model UN: public speaking, resolution writing, collaboration and caucusing, and knowledge and engagement with topic materials.
As the name suggests, the AMUN is a professionally-run simulation of the topics that are being discussed at the United Nations. Members from each team are part of different UN committees – Security Council, General Assembly, World Health Organization Executive Board, UN Environment Assembly, and Economic and Social Council – and both the individual performances and overall team performance are judged subjectively. 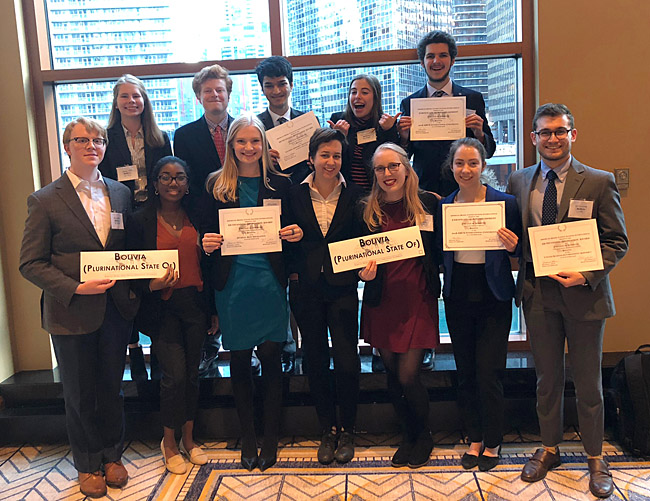 Some members of Wooster’s Model UN team display their certificates after being named an outstanding delegation. (photo submitted by Sabrina Harris)

Wooster’s 16-student traveling delegation represented the country of Bolivia, determined ahead of time via a lottery system. Each committee was issued two topics – the same ones that real UN agencies have the mandates and power to address – within their purview. For example, the General Assembly Sixth Committee, which handles legal affairs, discussed the “status of protocols additional to the Geneva Conventions of 1949 and relating to the protection of victims of armed conflicts,” and the Economic and Social Council addressed “international migration and development.”
All of the topics under consideration were pertinent to Bolivia, a poor country in western-central South America showing strong signs of economic growth. According to Sabrina Harris, president of Wooster’s Model UN student organization, “The importance of protecting native populations through democratic education, environmental protection, empowering women in development, and countering the trade of narcotics were all pillars of Bolivian foreign policy used throughout the conference. The range of committees Bolivia was assigned allowed the opportunity for Wooster students to address the topics head-on.”
Though the AMUN stresses the focus “should be that each student walks away with a unique, participatory education experience … on the complexities of international diplomacy,” awards are part of the conference as well, with the outstanding delegation being the most significant and only team honor.
“Wooster’s success this year came from both a supremely talented group of first-time delegates and the strong foundation of our accomplished veteran members,” stated Harris, who also noted a significant amount of research work, strategy brainstorming sessions, and resolution writing took place prior to the conference. “We focused extensively in our preparation on extemporaneous public speaking, fine-tuning resolution writing, and building collaboration and negotiation skills through different activities and workshops every week. We also focused on building a really strong support network and family dynamic, which definitely contributed to our overall sense of dedication and teamwork.”
In addition to the team honor, Wooster collected individual awards, with senior Jordan Griffith and first-year Shankar Bhat recognized for their efforts on the General Assembly Sixth Committee and senior Eric Guberman for his work on the UN Environment Assembly. Those awards were determined on a vote by student peers within each respective committee.
Bhat, Griffith, Guberman, and Harris were joined on Wooster’s outstanding delegation team by junior vice president Nick Shiach, sophomore research director Annelisea Brand, seniors Alena Carl and Adam Gillmor, sophomores Alex Cohen, Maureen Hanes, Jillian Kouayara, Olivia Proe, and Camryn Rosenstein, and first-years Rory Helweg, Andrew Lee, and Emmy Todd. In addition to the traveling team, each committee was supported by research team members who helped to collect information and write position papers in advance of the conference.
Kent Kille, the team’s faculty advisor and professor of political science, was pleased not only with the result but with the work leading up to the conference. “The effort this semester was amazing. At each meeting, the team members were involved in such creative exercises, which made them well prepared for engaging at the conference. It was also wonderful to see the supportive personal connections built between the team members,” he said and also noted, “the incredible administrative support provided by Dottie Sines in the provost’s office was a very important part of the team’s success.”
In April 2019, the team will travel to the National Model United Nations (NMUN) in New York, where Wooster will represent Sweden.