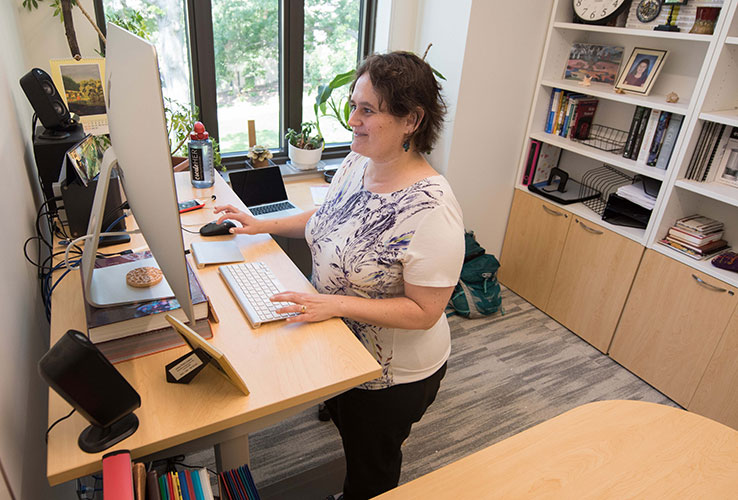 If you were walking across Wooster’s campus and someone asked where he could find a professor—he couldn’t recall her name, but knew that her undergraduate degree, master’s, and doctorate were all in physics—you probably would point him toward Taylor Hall, home of the physics, mathematics, and computer science departments. And if the professor in question was Erzsébet Regan, you would be wrong. The first holder of the Whitmore-Williams Assistant Professorship in Biology calls the Ruth W. Williams Hall of Life Science home.
Regan is a computational biologist, which means “I’m not a lab biologist. There’s not a lab component to my work.” Instead, her work focuses on uncovering “the principles of coordination between cellular phenotypes at multiple scales of organization and building predictive models of this coordination in health and disease.” And that involves complex computer modeling of large quantities of data.
For those struggling to recall the basics from an introductory biology course, Biology Online defines phenotype as “the total characteristics displayed by an organism under a particular set of environmental factors, regardless of the actual genotype of the organism. It results from the expression of the genes of an organism as well as the influence of environmental factors and random variation.” Think of an individual cellular phenotype as a component or module that gets wired together with other modules to form systems of increasing complexity, from individual cellular regulatory networks up to the human body as a whole. Complex diseases such as cancer typically alter more than one facet of a cell’s function, creating unhealthy combinations of cell behaviors that could include proliferation, migration, and resistance to cell death. “Building predictive models that help decipher this combinatorial coordination,” Regan says, “could greatly boost our ability to combat complex disease.”
Exploring Disease at the Molecular Level
To understand how these systems work and how disease can cause them to malfunction, it’s not enough to understand how each module operates in isolation, because there are all those environmental factors to account for, to say nothing of the random variation. The complexity is mind-bending, and computational biologists like Regan hope to decipher it by combing through data from enormous piles of published papers to bring together hundreds of individual molecular interactions in order to discern the laws that govern their coordination.
“If and when we uncover general rules that link regulatory modules into hierarchies,” Regan explains, “we may then be in a position to understand cellular regulation one module at a time, at every level of the hierarchy.” And that could open up our understanding of, and ability to develop therapies for, disease at the molecular level. Thanks to the Human Genome Project and other research efforts over the past two decades, there is “an insane amount of really good data” but not yet a good way to put it all together. Right now, Regan says, “the field looks like someone made a puzzle the size of Wooster’s campus, cut it into tiny pieces, threw away half of them, dumped the rest out on the ground, and said, ‘Have fun!’ And we don’t have the picture on the box to work from.”
Moving from Harvard to Wooster
Before coming to Wooster three years ago, Regan was a junior faculty member at Harvard Medical School, Beth Israel Deaconess Medical Center in Boston. She could easily have moved on to a major research-focused university but chose Wooster instead. Why? “Because I think what I do is needed in a liberal arts setting.” In a big research university, she says, “everything depends on bringing in massive amounts of funding, so the science you do gets put in the box that is most likely to attract it. And by the time people get through with a Ph.D., they’re not listening, they’re not attuned to what’s missing” from the mental models through which they view their work.
Regan’s teaching philosophy, which she describes as striving “to support my students enough to make progress, but little enough to call this progress their own” has proven to be a great fit at Wooster. It’s an approach that “reveals to them the value, joy and reward of working through a problem with increasing precision, and gaining new insight. My role is to spark their curiosity and pass on my sense of wonder, but also to help them build strength and confidence that carries them past their difficulties.”
The opportunity to work closely with and mentor talented students at Wooster has proven to be a real joy for Regan as well, and it began before she had even arrived on campus. Andrew Hamel ’16 actually emailed her to ask if she would be his senior I.S. advisor while she was still packing in Boston. “I was hoping my research would integrate both biochemistry and math (I was a math minor) as well as pertain to cancer,” Hamel recalled. “When I read her research background, I instantly knew it was a good fit.” Good enough that Regan recently submitted a paper, co-authored with Hamel and Herbert Sizek ’16, another of her first I.S. advisees, about the results of their work together.
Hamel, who is pursuing a master’s in bioinformatics at Boston University and working as an ophthalmology research intern at Massachusetts Eye and Ear Infirmary, says, “I could not have been happier with Professor Regan as an advisor. I was able to experience firsthand the intersection between biochemistry, mathematics, and computer science. Seeing it all come together is really quite beautiful.”
[A version of this story appeared in Wooster magazine.]