One Question Unearths a Lifetime of Discovery 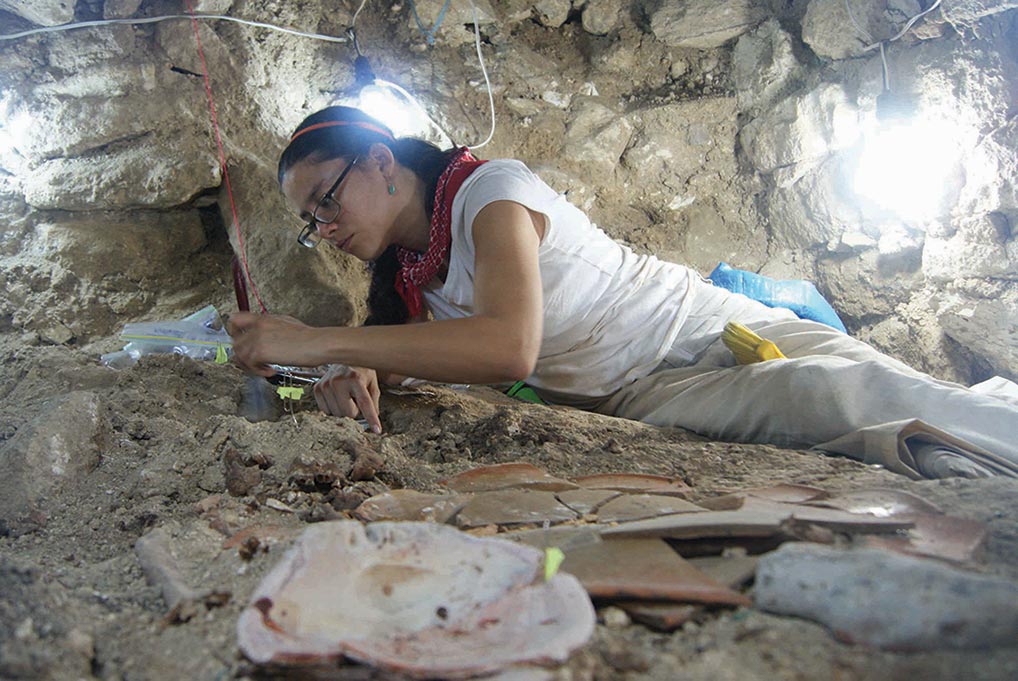 When Olivia Navarro-Farr was growing up in San Antonio, she expressed an interest in archaeology, and like many young enthusiasts drawn to that subject matter, the romance of ancient Egypt caught her attention. However, a simple question posed by her mother sent her on a career path resulting in two prominent discoveries (thus far) that now have strong ties to Wooster, where she is an assistant professor of archaeology. The question—“Why aren’t you interested in exploring your own roots connected to pre-Hispanic culture?”—sent her to Mexico on an eye-opening trip as a teenager (accompanied by her mother and aunt) where she had a taste of ancient indigenous Mesoamerican civilization. This led her to pursue a field school project in Belize as an undergraduate and eventually she immersed herself in Maya area archaeology; since graduate school she has worked in Guatemala, the “heartland” of ancient Maya civilization. Once Navarro-Farr began working there, she was “absolutely hooked.”
In addition to her original interest—a personal desire to understand her non-European roots— she was, and still is, highly motivated to educate a wider audience about the region’s fascinating past. “Our educational system does not privilege pre-colonized lives. There’s such a rich and deep history, I’ve always wanted to know more about it and to share with audiences,” she said.
The most recent major discovery of a royal tomb, officially termed “Burial 80,” was made in the summer of 2017 and credited to the U.S.-Guatemalan El Perú- Waka’ Archaeological Project, of which Navarro-Farr serves as a co-principal investigator. Located at the ancient city of Waka’ in northern Guatemala, it has been provisionally dated to 300-350 AD—the oldest to be discovered at the site (by several hundred years), confirmed by members of the Proyecto Arqueológico Waka’ and the Ministry of Culture and Sports of Guatemala.
Though not in the field during the time of discovery, Navarro-Farr and her team of Wooster students were not surprised. They were following the research 1,800 miles away via consistent updates provided by the project’s Guatemalan co-director, Juan Carlos Pérez. “The systematic investigations now provide the most comprehensive understanding of the ‘Early Classic Palace’ construction sequences,” said Navarro-Farr, adding, “the tomb itself is also incredibly important for our understanding of the foundation of the Waka’ dynasty.”
This comes on the heels of a historic 2012 discovery, the tomb of Kaloomte’ K’abel, more common­ly known as Lady K’abel, a seventh-century Maya queen. Navarro-Farr directed those investigations in collaboration with Griselda Pérez Robles during the spring and summer prior to her arrival at Wooster. “Lady K’abel was considered the greatest ruler of Waka’ during the ‘Late Classic’ period. The signifi­cance of this woman’s powerful role as a ‘Kalloom­te,’ which translates to ‘Supreme Warrior,’ provides tremendous insight on the nexus of gender and power in Classic Maya politics,” explained Navarro-Farr.
Aiding Wooster students’ understanding of the importance of that discovery, there is a stela, or free-standing monument, originally 11- feet tall, of a limestone impression of Lady K’abel at the Cleveland Museum of Art, the centerpiece of the museum’s Mesoamerican collection. Navarro-Farr attempts to organize a class trip there regularly.
Of course, it is not the field trip, but the fieldwork, in which budding archaeologists, such as Haley Austin ’16, Hannah Bauer ’19, Hannah Paredes ’19, and Sarah Van Oss ’16, truly gain insight into this ancient world, and Navarro-Farr’s prominent position gives them research opportunities rarely available at the undergraduate level. Bauer, Paredes, and Van Oss were all working at the project’s laboratory facility in Guatemala City this past summer, analyzing ceramics from Navarro-Farr’s excavations. Many of the vessels unearthed are household items, such as serving dishes and drinking cups, all made out of earthen wares, which makes for “a fascinating comparison as to the difference in how royalty lived compared to the com­mon people,” said Bauer. Paredes took an interest in sherds of pots “that helped fill in gaps about what kind of world they lived in and showed us artistic styles and motifs that were popular at the time.”
With Navarro-Farr’s leadership at the site, Wooster students will continue to take part in this unique hands-on experience. Their work has helped answer some questions, but endless others remain about the discoveries at the site, which spans 19 square kilometers with an average of 205 buildings per square kilometer. The materials found could offer information to archeologists about class structure, the economy of the time, political influences, the role of women, and more. Most of the buildings and plazas have not yet been investigated, but Navarro-Farr is in it for the long haul. “There’s a lot to be done. As long as I can happily keep going with it, I will. It’s a privilege to do it,” she said.
With the questions to be answered and discover­ies yet to be made, pursuing her own roots, as her mother suggested has led to a lifetime of discovery. “I think she used it as a moment to take an interest that I already had and channel it,” said Navarro-Farr. “No one in my family had a background in archae­ology, and she said you need to go to these places, and it had the absolute effect of blowing me away. So, I want to credit her for really shaping my path.”
[A version of this story appeared in Wooster magazine.]