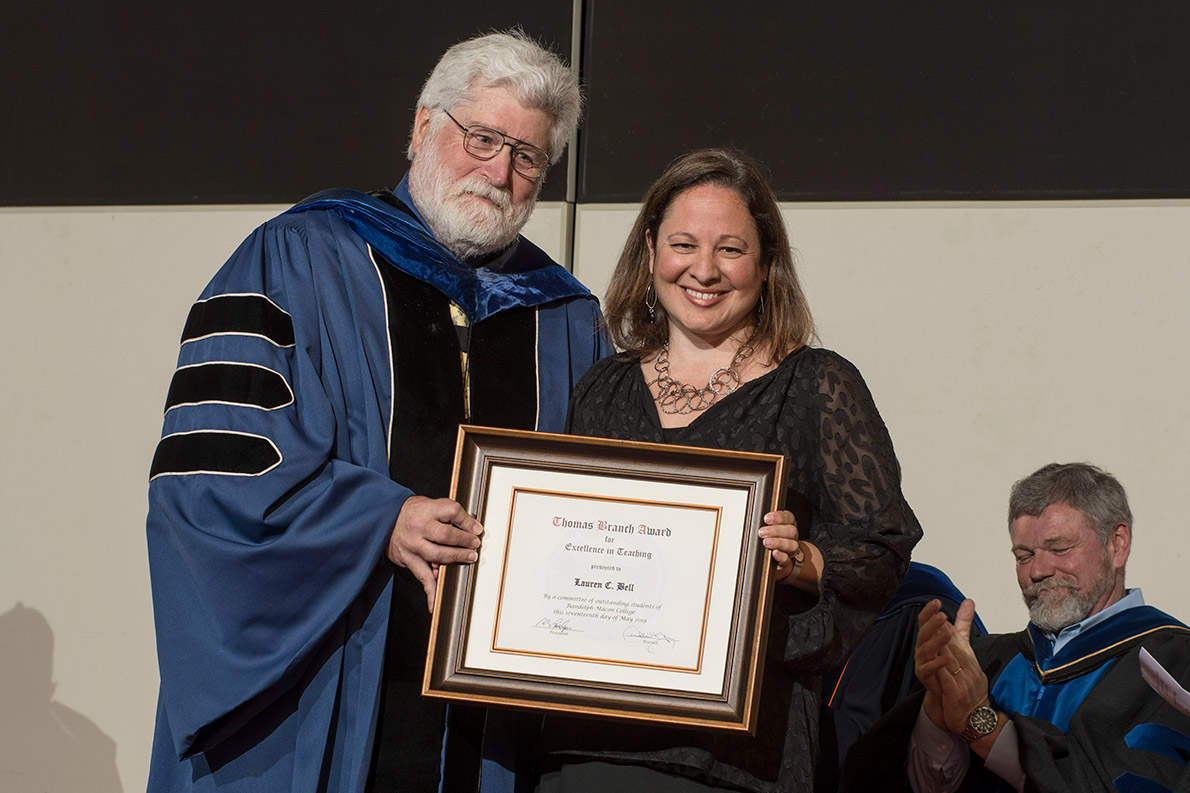 Lauren Cohen Bell ’94, professor of political science and dean of academic affairs at Randolph-Macon College, in Ashland, Virginia, received the Thomas Branch Award for Excellence in Teaching from the college in spring 2019 and was featured as a campus teaching award winner by the American Political Science Association in December. She had previously received the award in 2002 and 2004.
An alumna in political science at The College of Wooster, Bell considers serving as a teaching assistant for First-Year Seminar during her junior year at Wooster to be her first teaching experience, according to an article the APSA published about the award. She found herself serving as a peer-mentor to students in the course while also developing mentoring relationships with a number of faculty at the College.
“I was really fortunate to have several wonderful mentors at Wooster,” Bell said. She explained that Mark Weaver, emeritus professor of political science, was, “truly the best teacher I ever had, at any level of education,” adding, “I learned so much from his example about how to connect with students where they are intellectually.” She also learned to create an inclusive environment and think from the perspective of the student learner. Bell found the support and guidance she received from so many people at Wooster to be “instrumental in [her] personal and professional development.”
Through her Independent Study working with Eric Moskowitz, emeritus associate professor of political science, she learned to conduct “meaningful research” and developed skills that gave her an advantage in graduate school and continue to serve her in her research today. With Moskowitz’s guidance, she studied the voting patterns and behaviors of Supreme Court justices. “I became fascinated with judicial appointments, which ultimately led to my Ph.D. dissertation on the role of interest groups in the U.S. Senate confirmation process for federal judges and other officials,” she said, earning her master’s and doctoral degrees from the Carl Albert Congressional Research and Studies Center at The University of Oklahoma.
Bell joined the faculty at Randolph-Macon in 1999, teaching political science courses ranging from Parties and Voting Behavior and Constitutional Law to Research Methods. As associate dean of the college from 2007 to 2014 and currently in her role as dean of academic affairs, she’s drawn on her leadership experiences at Wooster, where she was president of the Student Government Association and editor-in-chief of The Wooster Voice student newspaper.  “I learned a huge amount about how to write, think, and lead from those experiences,” she said, and now she uses those skills as she works closely with a variety of people throughout the college administration. “My leadership experiences at Wooster gave me important insights into how liberal arts colleges work, and I build on those experiences all the time in my current work.”