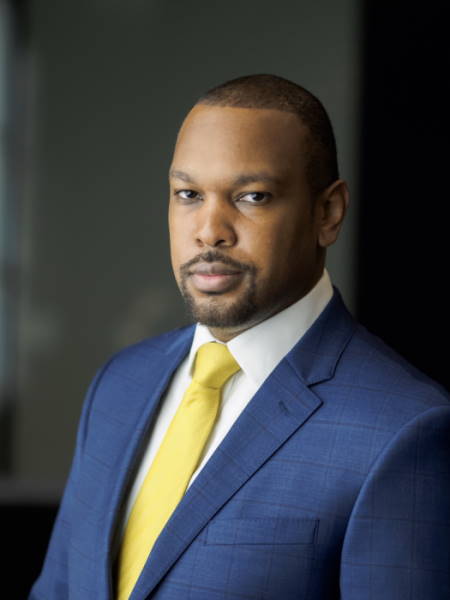 Remington Jackson ’12 had a full well-rounded Wooster experience, majoring in philosophy, minoring in political science, playing football and running track and field, participating in the Entrepreneurship Club, and working at the library. His level of involvement on campus taught him important lessons about time management, but also about all of the traditions that make Wooster a special place. “For those that have never attended and cannot relate to the inside jokes of Beall Avenue, attempting to fill the arch in the hopes of having class cancelled, the bagpipes leading the football team down the hill, or countless other fond memories, it is an experience that can never truly be explained, it must be lived and felt,” Jackson said.
The phrase “Independent Minds Working Together,” a Wooster tagline, always resonated with  Jackson who said he often thinks of the words in his career as an attorney for The Port of Greater Cincinnati Development Authority. At The Port, Jackson works to “bring tax delinquent and blighted properties back to productive status,” improving the property value of areas which have gone without resources and attention. “While a lot of my work may be independent, it is tightly connected with the other three attorneys on our legal team,” he explained. “Furthermore, the legal team’s work plays a pivotal role in the organization’s mission, but we would also not be able to do our jobs without the rest of the organization. Finding the balance of independence and interconnection was an important skill that was planted at Wooster for me and has only continued to flourish ever since.”
Jackson did not initially plan to attend Wooster but credits his mother for encouraging him that it would be the best option for him to be able to play sports and prepare for law school, which he attended after graduation. “My mother was right that Wooster was the best fit for me by allowing me to grow in ways I hadn’t considered at the time, and I probably would have never been able to explore at another institution,” Jackson said.
Jackson explained that his Independent Study project in particular prepared him for his time in law school and career as an attorney. He wrote his I.S. on the death penalty and said that the interest level and objectivity he was able to maintain on this polarizing topic proved to him that he could handle law school. Jackson also said that, with the support of his advisor Professor of Philosophy John Rudisill and second reader Professor of Philosophy Evan Riley, with whom he is still in touch, I.S. taught him that if “I can perform the appropriate planning and writing necessary to complete this project, I can do the same in any other educational goal I undertake, no matter the adversity.”
In his four years at the College, Jackson found value in Wooster’s myriad opportunities for involvement, unique traditions, and supportive professors, which prepared him for law school and his career as an attorney, and also instilled a deep appreciation for Wooster that he maintains to this day.