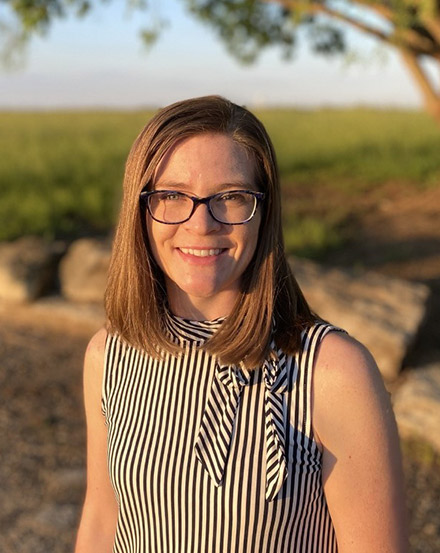 Mary Elizabeth Walters ’12 is a professor of American military history and strategy at Kansas State University whose primary research interests originated from her Independent Study project at The College of Wooster. “My research focus is on the Kosovo Refugee Crisis in 1999,” Walters said. Majoring in history and political science, Walters became interested in this topic through her undergraduate research. “My I.S. was a comparative case study of the intervention in Kosovo by NATO in 1999 and the British intervention in Sierra Leone in 2000,” she explained. “That work is what started my Ph.D. research and now the book I’m working on, so it all comes back to the I.S. project.”
Walters came to Wooster knowing that she wanted to be a historian and only decided to also major in political science when Jeffrey Lantis, professor of political science and global and international studies, convinced her to take a greater interest in the subject. She also received support and mentorship from Boubacar N’diaye, professor of Africana studies and political science, who was her political science I.S. advisor. Walters has found her political science major to be useful in her career as a historian, especially given her research focus. “Working on a topic in 1999 is cutting-edge as far as history goes. We don’t tend to work on current topics,” Walters explained. “Much of the literature I work with is actually in political science. Having the background in political science and understanding the literature and the methodology has proven really useful for being able to be part of that academic conversation.”
Walters went to graduate school directly after Wooster, receiving her master’s and Ph.D. in history from the University of North Carolina at Chapel Hill. While attending such a large university, Walters realized how lucky she had been to receive the research-oriented education she did as an undergraduate. “Wooster gives students opportunities that are difficult to find at large universities,” Walters said. “At Wooster, I had the opportunity to start doing my own research from freshman year.”
In particular, Walters described the historiography class she took sophomore year with Madonna Hettinger, Lawrence Stanley Professor of Medieval History, as “the most useful class I ever took.” Walters described historiography as the study of “how previous historians have approached history and understood history” and said that Hettinger’s “approach to historiography was far more comprehensive and useful than any historiography class I took in grad school.” Walters explained that Hettinger expanded her understanding of the work that historians do beyond merely visiting archives, reading documents, and crafting an argument. “Professor Hettinger helped me start to think more critically about which voices are privileged and which are ignored, to question why a historical narrative might feel normal and how different theories or methods might be used to understand the same historical problem in very different ways,” she said. “Even though I only took the one class with Professor Hettinger, I would definitely put her down as one of the most influential professors for me.”
Teaching at Kansas State, Walters tries to incorporate the type of instruction she received at Wooster into her own classes. “I love working with students and seeing the light bulb moment when they get it—the feeling when they realize they can be the experts,” she said. Walters in particular remembered a time when she assigned a research paper in her undergraduate class on the Vietnam War, and her students found sources and learned facts that she didn’t even know about. The self-driven work that her students did reminded her of what she was able to do as a student herself at Wooster. “That’s really empowering,” Walters reflected. “That’s something I enjoy doing here, and something that Wooster incorporates throughout the time there.”