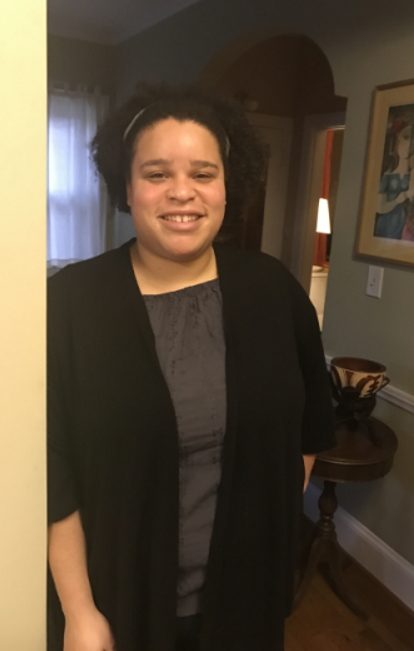 As the exhibition specialist/project director for the Smithsonian Institution Traveling Exhibition Service (SITES), Sara Artes ’03 manages exhibitions from their conceptual stage through their national and international tours. An anthropology major at Wooster who then went on to study sociology and anthropology at the graduate level, Artes primarily focuses on cultural and historical exhibitions, with a particular interest in sharing underrepresented stories.

Artes came to Wooster with dreams of becoming a doctor, but an Introduction to Anthropology class with Pam Frese, professor of sociology and anthropology, made her fall in love with the field. Frese became Artes’ mentor throughout her time at Wooster. “I still keep in touch with Pam, and I think of her as my great teacher and advisor; she’s a pretty incredible person,” Artes said. Frese encouraged Artes to attend the Border Studies off-campus study program, where Artes lived in Ciudad Juárez, Mexico and held an internship at the Center for Environmental Research Management out of the University of Texas at El Paso (UTEP). It was there that Artes began research for her Independent Study project that explored the consumption of soft drinks along the U.S. and Mexican border, a topic that had not been studied much at the time. “One of the issues I was looking at was the health effects of drinking soft drinks as an alternative to water,” Artes said. “It wasn’t until later that this started becoming a popular topic.”

After graduation, Artes returned to UTEP for a master’s program in sociology, where she originally planned to continue her I.S. research but pivoted her focus to the Black population along the border, another topic which had not been looked at extensively. Artes continued to do fieldwork in El Paso and Juárez while in a Ph.D. program in anthropology at American University. “In my Ph.D. program I was coming in a little ahead of some folks in terms of the theoretical foundations,” she said. “A lot of people hadn’t had the opportunity to do thesis-based work, so going through the I.S. process my junior and senior year really did help.”

It was during research for her Ph.D. that Artes first had the opportunity to do museum work and was particularly compelled to highlight underrepresented stories through the exhibitions she developed. She got a job with the National Park Service at Chamizal National Memorial in El Paso, Texas, where she updated their exhibitions to include a broader variety of stories. “They had a really old and antiquated exhibition space and interpretive center. There were issues around representation and inclusion of people outside of Mexican and Mexican American populations,” Artes explained. “I developed an exhibition on African American History on the border and an exhibition on the Chamizal agreements and the displacement of the local population to make way for a cemented US/Mexico boundary.”

Artes also held an internship at the National Archives for Black Women’s History during her Ph.D. program, which is where she learned about Wednesdays in Mississippi, a woman-led, interracial project during the 1960s civil rights movement that brought women from the north to the south to discuss social justice. Artes recently proposed Wednesdays in Mississippi as a topic for SITES to develop into a traveling exhibition. The idea was approved for development, and she is currently working on the exhibition that would shed light on this project that is not widely known. “I’m really trying to work on stories and advocate for myself to work on stories that are important to me and that I think are very often underrepresented,” Artes said. “It’s important that these stories are known and I have this platform and this vehicle to do it through.”

Artes particularly loves that her current position allows her to constantly learn about a wide variety of topics. “I literally get paid to learn about very interesting topics in depth,” Artes said, “not just superficially understanding them but getting to unpack them with the leading minds around those topics.” As the exhibition specialist/project director, Artes shares what she learns with audiences across the country and the world through developing traveling Smithsonian exhibitions. “I get to see people walk through my exhibitions and engage with them,” she said. “Whether they enjoy them or not, it’s exciting to see the final product and people’s reactions.”