WOOSTER, Ohio – A data analysis of Habitat for Humanity in Wayne County, Inc., performed by College of Wooster students Will McCullough and Tabitha Skornik-Hayes, revealed a series of interesting findings that will be utilized, in part, by the organization’s upcoming capital campaign. The eight-week undertaking was one of nine projects that took place this summer via the College’s Applied Methods and Research Experience (AMRE) program.

The AMRE program pairs student teams and their faculty advisor(s) with local businesses/organizations, allowing students to apply their education in a “real world” setting while also helping a client solve a problem. In this case, McCullough and Skornik-Hayes were tasked with putting together a detailed economic impact study.

Specifically, the students were asked to quantify the economic and social impact of the local Habitat and to create financial projections for its ReStore, which accepts donations of building materials, appliances, tools, lawn and garden items, etc., that are used in the construction of new homes for families in need of affordable housing. 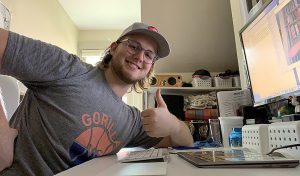 McCullough, a senior economics major, focused on the analysis of mortgage savings and the neighborhood spillover study, while also contributing to the ReStore section. “I calculated mortgage savings using average housing market figures for the time period if families partnering with Habitat had bought their house on the market. For the neighborhood study, we pulled housing data from the Wayne County Auditor database, which I compiled into a dataset and used to estimate a regression equation,” he explained.

In sharing the executive summary, Skornik-Hayes, a junior global and international studies major from Eugene, Ore., said that Habitat for Humanity has an overall positive effect on Wayne County. “Its greatest impact was seen in neighborhood markets with housing characteristics similar to those of Habitat homes, with Habitat homes increasing the value by 5.96%,” she highlighted.
They also concluded that a zero percent interest rate on mortgages allows Habitat for Humanity families to save $158,276 over a 30-year period, thus increasing disposable income for their partner families, and a large base of volunteers helped it save $504,300 on construction costs from 2016-20. As for the ReStore, 45 percent of the nonprofit’s revenue comes from sales there, which helps the organization’s overall ability to help families throughout the county.

Having been a data-driven project, the students were able to overcome the challenges of the work taking place during a global pandemic. McCullough joked he did the project while wearing shorts from his bedroom in Pittsburgh, Pa., but also noted the virtual experience was “engaging and rewarding, while keeping everyone safe.” Skornik-Hayes added that “it was certainly less of a social and immersive experience than what AMRE is supposed to be,” but she was still able to “develop new skills and learn how to use them outside of the academic setting,” and the pair stayed on task with regular check-ins with each other, their advisors, and the client.

This was the first time Habitat for Humanity in Wayne County had been an AMRE client, and after executive director Beth Weaver reviewed the executive summary and considered how the data can be a powerful tool for fundraising, it may not be the last. “It was very important to us to partner with The College of Wooster. The College is such a great resource for all of us living in Wooster. We love to be able to be a part of some of the aspects and benefits of the College,” she commented. “We are proud to have partnered with them on this project and I am certain we will reap the benefits of the AMRE students’ hard work.”