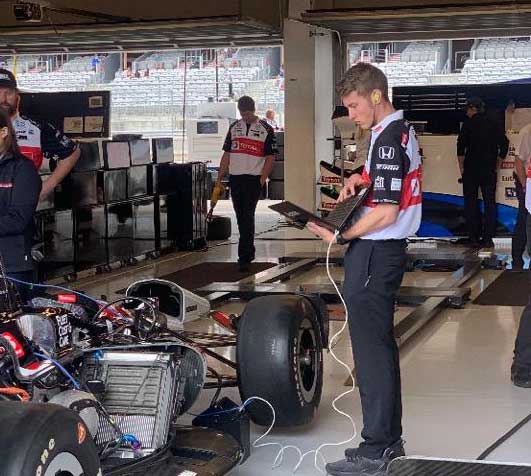 What did the top three finishers of this year’s Indianapolis 500 have in common? They had two Wooster alumni working hard to get them on the podium. Danielle Shepherd ’14 and Collin Hendershot ’18 applied skills they learned during their four years at Wooster to their current occupations in auto racing. Shepherd, a simulation engineer for Chip Ganassi Racing Teams, and Hendershot, a data engineer for Rahal Letterman Lanigan (RLL) Racing, both play important roles for their respective teams during major races.
Traditionally held over Memorial Day weekend, the 2020 Indianapolis, or Indy, 500 was postponed until Aug. 23 this year due to the COVID-19 pandemic. The first and third place finishers, Takumo Sato and Graham Rahal, were drivers for RLL Racing while Chip Ganassi’s Scott Dixon placed second.

Hendershot put into words the excitement the team felt after its top-three finishes. “RLL having two cars finish on the podium at the Indy 500 was huge because we often are not considered one of the top teams,” he said. “We achieved a result that some people in the sport only dream of. It was really tough to immediately understand what we had just done. Now that I have had some time for it to sink in, I am just so proud of how much effort the whole RLL team put into making this happen.”
The physics major analyzed data from the sensors in Rahal’s car and was also responsible for monitoring the fuel. In addition to his engineer duties, Hendershot is a part of Rahal’s pit crew. “When the car comes in for a pit stop,” he explained, “I operate the air jack to lift the car off the ground, then drop it once the tires are changed.” When describing the most rewarding part of the job, Hendershot relied on his team’s motto of “focus forward.” “The race season consists of multiple back-to-back races, so it can be a challenge to keep a level head and focus forward,” he said. “Regardless you have to bounce back and get ready for the next event.”
Prior to joining RLL Racing, Hendershot gained experience about the aerodynamics of high-speed vehicles from his I.S. and acknowledged Associate Professor of Physics Cody Leary for his mentorship during that process. “Dr. Leary, my I.S. advisor, was always there to help me with physics. Whether it was explaining a topic in a different way or diving deeper into a topic that I was interested in, he was available for a conversation. He never let me just scrape by and he pushed me every step of the way to do better.”
Hendershot also credited Shepherd, a fellow physics major at Wooster and engineer for a competing team, for giving him an opportunity to pursue his career. “I asked professors in the physics department about alumni who had chosen a path in racing, and they connected me with Danielle,” he said. “She helped me gain contacts in IndyCar and played an important role in me getting the chance to secure my role at RLL.” 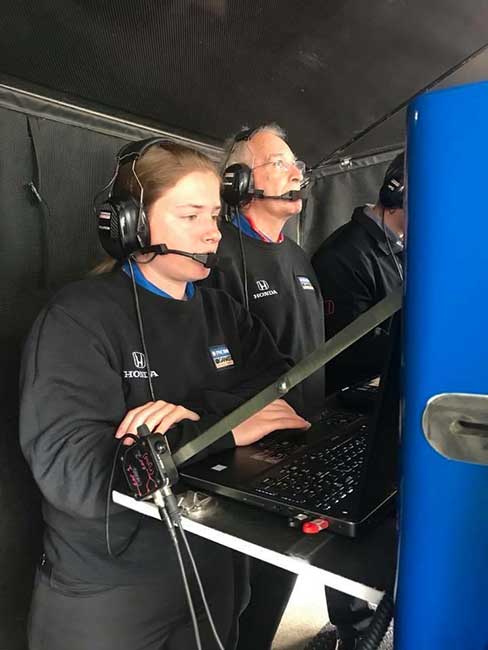 Shepherd, who double majored in mathematics at Wooster, ran simulations on the three cars participating in the Indy 500 and presented them to the lead engineers before the race. She was also on the pit stand for another Chip Ganassi driver, Felix Rosenqvist, who finished 12th. Regarding the team’s runner-up finish, she said, “Obviously, the goal is to win so coming up short of that is not what we set out for. That being said, Scott drove an awesome race and had a great second-place finish.”

Shepherd credits her liberal arts education for preparing her for her current career in the racing industry. “There are always problems that need to be solved, there are always ways to make the car go faster,” she explained. “Coming to racing with a liberal arts background and working with others who primarily have engineering backgrounds allows for the problem to be looked at from multiple angles.”
She also recognized Associate Professor of Mathematics Drew Pasteur for helping her find her passion. “Dr. Pasteur was my math faculty advisor, so he had the pleasure of being in the room when I announced that I wanted to pursue motorsports,” Shepherd said. “Wooster doesn’t really have a motorsports program, but that didn’t stop him from going above and beyond to help me find opportunities to pursue my dream and build connections.”
Similarly to Hendershot, the best part of the job for her is constantly moving forward to solve new problems. “The goal is always to make the car better and faster, but what a driver needs in order to accomplish this is different each race weekend,” Shepherd said. “Constantly pushing to try to make the cars better and faster is exciting to me and I love the challenge.”
Above: Hendershot at work in the garage at Circuit of the Americas in Austin, Texas in 2019.