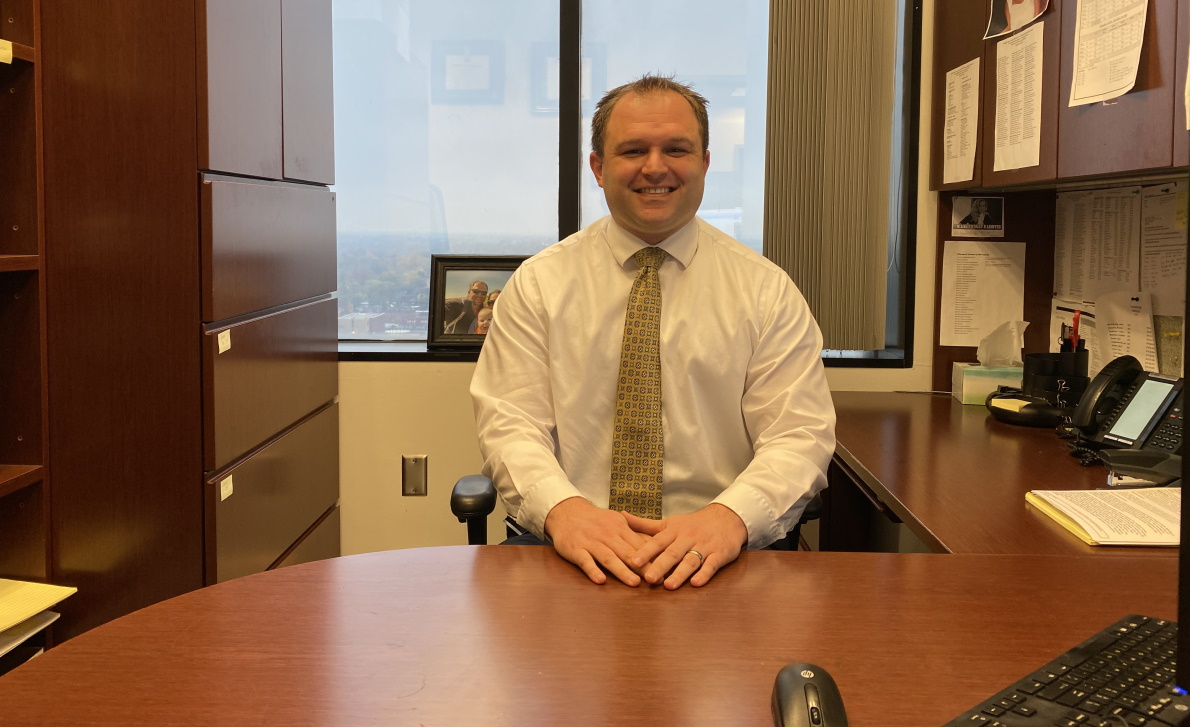 Steve Schott ’07 knew he wanted to be a prosecutor since he was a teenager but decided to take an unconventional path. After graduating from Wooster, he joined Teach for America where he spent two years as an eighth-grade special education teacher in North Carolina. “I was fortunate when I was an elementary school kid to have a teacher that really changed my life so before going into law, I wanted to do that first,” Schott said.
After graduating from the University of Illinois College of Law, Schott worked for nearly six years at the San Diego District Attorney’s Office before returning to Ohio where he now works as an assistant prosecuting attorney in the gang unit. “My primary charge at the moment is investigating and prosecuting gang related crimes in Columbus,” Schott said. “I am in court almost every day and can carry over 100 cases at any one time. The majority of those are, unfortunately, high-level felonies that range from shootings to murders and robberies.”
Despite the violent nature of these crimes, Schott explained why doing legal work is important. “I wanted to spend time prosecuting what I would consider to be the worst of the worst; that is, folks that make things less safe for people who just want to walk down the street,” he said. “Gang crimes are a significant problem in our major cities, and I’d like to spend time trying to protect my community the best way I can.”
At law school, however, Schott had the ability to see the other side when he worked on a case for the Innocence Project, which seeks to vindicate those who were wrongly convicted. “I worked on a successful exoneration for a man who was going to spend the rest of his life in prison for a murder that he did not commit,” he said. “I thought being able to see the other side would make me a better prosecutor; that is, to better appreciate the real world consequences of errors in my chosen profession.”
During his time at Wooster, Schott participated in moot court, a student law program that simulates appellate arguments before the Supreme Court. The experience allowed him to gain essential skills for both law school and his career as a prosecutor. “The ability to just think on your feet in response to questions and articulate a position is something that, whether for law or any other type of work, helps build the confidence to speak publicly—you can’t put a price tag on it,” Schott said. “I did moot court in law school, and I had friends who were extremely intelligent and bright, but I could tell that they just didn’t have the same experience as me. Fortunately, because of Wooster, I had a leg up when I got there.”
Schott added that Wooster’s academic curriculum was also a major factor in preparing him for law school. “Wooster’s critical thinking requirements are in many ways akin to law school,” he said. “I always credit my professors in the courses I took at Wooster—including I.S.—but it’s the requirements that really prepare you for the next step, whatever that next step may be.” One of those professors was Mark Weaver, professor emeritus of political science and former moot court coach. “Mark cares about Wooster and cares about that program,” Schott said. “I think he knows what it can do for students, and I can certainly speak to that from first-hand experience.”
As a prosecutor, Schott explained that he does not always have good days, but there are certain moments that make the job worth doing. “The most rewarding part is when you get to speak to a victim following the resolution of the case and [they] feel like it was at least a fair, if not just, result,” he said. “One time, the parents of a murdered young boy hugged me afterwards—I was just a law student at the time—and it almost makes me tear up to this day thinking about it. It really makes you go home and feel good about what you’re doing.”
Schott is grateful for his experiences at Wooster and how they prepared him for his prosecuting career. “To this day, I’m thankful for the education I received when I was there,” he said. “I come back and judge moot court competitions because of my feelings toward the program and the connection I still want to have with it. In fact, I met my wife at the College so that’s also part of the connection. I’m thankful for Wooster and the type of education it provides.”
Above: Steve Schott ’07 in his Franklin County office where he works as a prosecutor in the gang unit