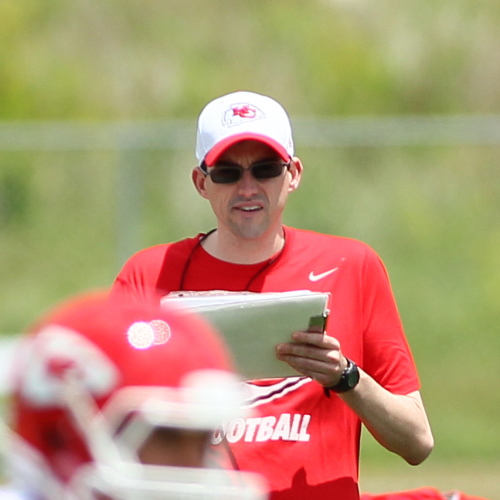 As statistical analysis coordinator for the Kansas City Chiefs, Mike Frazier ’03 uses player statistics and data generated by coaches, the NFL, and third-party vendors to assist Head Coach Andy Reid and the Chiefs coaching staff in “putting players in the best position possible.”

“We have access to an extremely large amount of information,” Frazier said. “During the season, a lot of effort is focused on our upcoming opponent. We’re gathering information on what they have done successfully in the past. The coaches want to put our players in a position where they can succeed against something that we know our opponent is likely to do given their strengths.”

One of the challenges Frazier faces is “taking all this information and creating a way that people can visualize it,” he explained, noting that different people process information differently. Frazier explained that his experience at Wooster helped him to develop skills to break down that information. “The writing skills that you begin to develop in first-year seminar and are a part of so many of the classes are important for me in terms of creating reports. I can do all the research in the world, but ultimately, I have to find a way to communicate it concisely, accurately, and in a way that allows that information to be digested by the decision makers. That was certainly a big part of what I took away from the interdisciplinary classes.”

Majoring in business economics at Wooster, Frazier first completed an internship with alumnus Phil Shaffer ’78, who managed several large endowments and clients with high net worth, and also participated in the Jenny Investment Club, “a rare experience Wooster has where students have the opportunity to invest real money,” he noted. It was the late Professor Jack Julian in economics who encouraged him in his junior Independent Study involving baseball statistics. “Professor Julian encouraged me to work on something that was fun, figuring that I’d be more likely to enjoy the process.” Frazier later took an internship through the Great Lakes Colleges Association and The Philadelphia Center that connected him with Joe Banner, then-president of the Philadelphia Eagles. “Right around the early 2000s, sports teams and leagues were starting to get more interested in additional research and development in football. Jeffrey Lurie, the owner of the Eagles had empowered Joe Banner to put resources toward essentially research and development,” he said. “They brought in interns and then created a full-time position for me in 2003. It wasn’t necessarily a career that I went into Wooster thinking I wanted to get into because it didn’t necessarily exist.”

Participating in the internship that would lead to his career in this way helped Frazier focus his interest. “Whether it’s in finance or in sports, for anybody, internships are an opportunity to try things and take a test drive with a career you think you may be interested in, that was certainly instrumental for me,” said Frazier, noting the fun he still has in his current role with game days and competitions. “It really is amazingly fun. I’m incredibly fortunate to be able to be a part of it.”

Published in the Wooster Magazine in Spring 2021.