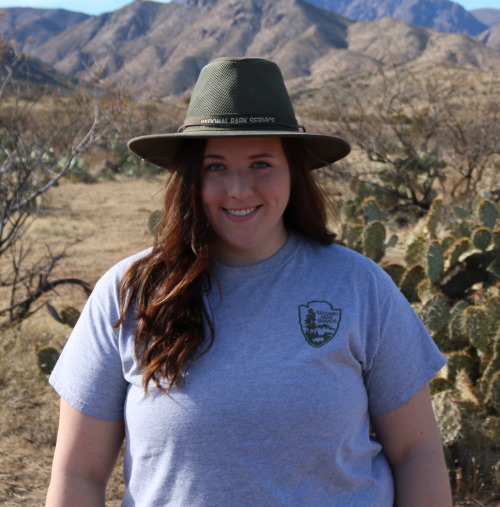 Jade Robison’s work as an archeologist at the National Park Service’s Tonto National Monument in Arizona, with 100 active archeological sites, is most definitely hands-on. While no day on the job is the same as any other, she can be found cleaning and identifying artifacts, confirming that projects comply with various laws, doing research, hiking the backcountry to assess the condition of the two ancient cliff dwellings open to the public on the site, or opening excavation units. For someone who had never set foot in Arizona before taking the job at Tonto last fall, Robison is enjoying working with the public and tribal partners who have connections to the area. She’s also using skills she learned at Wooster and built on her journey through graduate school and in internships along the way.

As an archeology major with a minor in classical studies at Wooster, Robison had firsthand experience working with collections and archives while working under Special Collections Librarian Denise Monbarren, who Robi – son called “a wonderful mentor who believes in her student workers and always provided opportunities to develop our skills.” Robison’s focus as an undergraduate had been Mediterranean archaeology, and she intended to teach or work abroad. As she searched for graduate programs, however, Nick Kardulias, emeritus professor of archaeology and anthropology, connected her with one of his former students, Allison Young ’10, who had earned a master’s degree at University of Nebraska-Lincoln and had gone on to work for the National Park Service. Robison had been considering UNL for graduate school, but still wasn’t sure of the direction she wanted to take her career. “After this meeting, I finally saw that there was a clear pathway I could follow to become an archeologist,” she said.

Although she initially didn’t think the American Southwest was a place she wanted to be, Robison kept her options open. At UNL, she found a new focus in Southwest studies. She credits the connections she made at Wooster and the College’s emphasis on taking an interdisciplinary approach to everything she does as keys to her success.

“I work on an interdisciplinary team daily. Here at Tonto, I work with interpretation staff, a natural resource specialist, and a facilities manager. I communicate regularly with people outside of my park, including experts in the regional office, tribal partners, and museum collection curators and archivists. The diverse range of courses available to me while at Wooster solidified the skills I’ve needed to collaborate with experts out – side of my field,” she said.

Now in a leadership position within the National Park Services, Robison said Wooster prepared her to step up. “I am absolutely not a natural born leader,” she said. “I don’t always like to be in charge, or to be responsible for making a big decision. Wooster taught me that while leadership is important, it’s equally important to be a collaborator.”

Published in the Wooster Magazine in Spring 2021

Explore the diverse traditions of collection, curation, research, display, and preservation and plan your career